Photo courtesy of zimbio.com. The New Orleans Saints are struggling in the absence of their head coach Sean Payton (pictured above).

After two straight losses to non-playoff teams from a season ago, the New Orleans Saints look like a different team from 2011. That offense, which was so unstoppable under Sean Payton, is out of sync, and the defense is struggling without Gregg Williams. In an improved NFC, the Saints appear to be in trouble. Payton was that important to this team and it’s showing.

In this weeks power rankings, the Eagles and the Dolphins made the biggest leap, jumping seven spots, while the Bears and Redskins had the biggest fall, tumbling six spots. The Falcons cracked the top five, and the 49ers maintained their number one ranking.

Enough of me spoiling it, time for you to find out for yourself where your favorite team ranks. END_OF_DOCUMENT_TOKEN_TO_BE_REPLACED 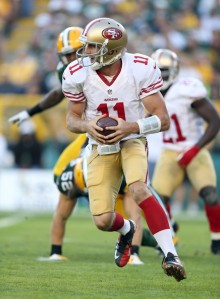 Photo courtesy of zimbio.com. Alex Smith (pictured above) outplayed reigning MVP Aaron Rodgers as the 49ers got a huge victory in the opener at Lambeau Field.

Last season, it was Cam Newton who dazzled us all, throwing for 422 yards in his NFL debut. One year later, Robert Griffin III went into the Superdome, threw for 322 yards, two touchdowns, and beat the Saints. It took awhile Washington, but your quarterback has finally arrived. The Redskins will make some noise in the NFC East this season.

Griffin was just one of many stories through Week 1 of the NFL season. In case you missed it, here’s a quick recap.

Taking over this weeks number one spot in the power rankings are the 49ers, who marched into Lambeau Field and beat the Packers. Another team that made a statement was Peyton Manning and the Denver Broncos. Manning finished 19-26 for 253 yards and two touchdowns in a win over the Steelers.

Ah, so much to get to. Where does your team rank after Week 1?

1. San Francisco 49ers (4): 1-0. That was a statement win for the 49ers in Green Bay. Alex Smith outplayed Aaron Rodgers. Impressive. (Next game: vs. Detroit on SNF) END_OF_DOCUMENT_TOKEN_TO_BE_REPLACED

Photo courtesy of zimbio.com. Are Jay Cutler (pictured above) and the Chicago Bears poised for a big year in 2012? Our very own Wesley Kaminsky thinks so.

The NFL off-season always seems too long, doesn’t it? In an off-season dominated by Tim Tebow and the New York Jets, it’s that other team in New York who are the reigning Super Bowl champions. They shocked the NFL world a season ago, getting hot at the right time, beating the likes of the Packers, 49ers, and then eventually the Patriots. That takes guts.

With teams such as the Packers, 49ers, Bears, Saints, and Falcons, just to name a few, the NFC is becoming a powerhouse. I didn’t even touch on the NFC East.

In the AFC, the Patriots look like the clear-cut team to beat, as they added more weapons to an already lethal offense and revamped their defense.

Can the Ravens finally get over the hump? Will Peyton Manning return with a vengeance?

These questions will be answered in due time. END_OF_DOCUMENT_TOKEN_TO_BE_REPLACED

Photo courtesy of sports.gearlive.com. The Packers have been number one in the power rankings all season long. Can they hold up their end of the bargain and repeat as Super Bowl champions?

In the final edition of power rankings before postseason play starts next weekend, I’m ranking teams on their entire body of work for the 2011 season. It was a crazy season, just as it always is, and one of the most exciting regular seasons we have seen in quite some time.

Some of the wild events just to name a few were “Tebow Mania,” the Packers near run of perfection, and Dan Marino’s single season passing record getting broken (twice). We truly have seen the gamut this season.

Now, it’s the best time of the year, the playoffs. Who will be this years Packers? Or will the Packers win back to back Super Bowls? END_OF_DOCUMENT_TOKEN_TO_BE_REPLACED

Photo courtesy of bearsgab.com. Jay Cutler (pictured above) will likely be sidelined for the rest of the regular season. How will the Bears respond without their offensive leader?

Last week it was Matt Schaub who was lost for the season with a foot injury, just when the Texans looked like they were getting it all together. A week later, it’s Jay Cutler who will likely miss the remainder of the regular season with a broken thumb on his throwing hand that will require surgery. This couldn’t come at a worse time for a Bears team who have five straight games and look like a legitimate threat to the Packers. Now, that talk will have to wait, as the Bears turn to Caleb Hanie, and pray he can lead them back to the playoffs.

1. Green Bay Packers (1, won 35-26): 10-0. Next up, the Packers get their biggest test of the season yet: In Detroit, on Thanksgiving. (Next game: at Detroit) END_OF_DOCUMENT_TOKEN_TO_BE_REPLACED

Photo courtesy of sports.yahoo.com. Vince Young (pictured above) did his best Tim Tebow impression on Sunday night, leading the Eagles to a huge victory over the rival New York Giants.

We are nearing turkey day which can only mean one thing.  Football is out in full force.  The games on Thanksgiving Day are sure to impress, with a family reunion set to take place in Baltimore and a goliath showdown between two of the NFC’s elite in the Motor City.  And let’s not forget about the wild weekend that turned the BCS upside down in terms of College Football.  There is so much to talk about and so much going on.  Here is what has my attention.

-I am still astonished by what Tim Tebow has been able to accomplish.  But on Sunday night, I had the chance to watch another once very highly touted quarterback do his best Tebow impression at MetLife Stadium.  Vince Young, the man who coined the infamous “Dream Team,” backed up the talk with a big time victory against the division leading Giants.

But the real question is, how did he do it? END_OF_DOCUMENT_TOKEN_TO_BE_REPLACED

Photo courtesy of boutsportsreport.com. Can Mark Sanchez (pictured above) help the Jets take control in the AFC East with a victory over Tom Brady and the Patriots?

Last week was a wild one to say the least filled with nail-biters and crazy endings.  Tim Tebow once again found a way to win.  The Cincinnati Bengals continued their improbable run.  Aaron Rodgers and the Green Bay Packers continued to flex their defending champion swagger.  And Joe Flacco had his “One Shining Moment.”

After Week 9, here is the scoreboard.

Photo courtesy of zimbio.com. The often criticized Joe Flacco (pictured above) was the shining star of Week 9. Is he finally ready for stardom?

Out of every week thus far, Week 9 provided the most drama for the 2011 NFL season. Heading into the week, the slate was highlighted by the Giants-Patriots, Ravens-Steelers, and Bears-Eagles. And I must tell you, they did not disappoint. Both Eli Manning and Joe Flacco threw touchdowns with under 20 seconds left to win, shocking the Steelers and Patriots. The Eagles, after a dominating 34-7 win against the Cowboys took a huge step backwards, losing to the Bears 30-24. Andy Reid, the pressure is back on you. That loss was inexcusable. END_OF_DOCUMENT_TOKEN_TO_BE_REPLACED 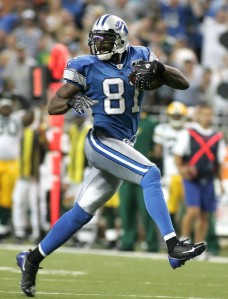 Photo courtesy of zimbio.com. No wide receiver has been better through the first five weeks of the season than Calvin Johnson (pictured above). The Lions top target has been simply unstoppable and has led his team to its first 5 and 0 start since 1956.

Detroit is undefeated.  The 49ers are cruising in the NFC West.  The “Dream Team” is a nightmare.  And the Jets are currently in the midst of a three game losing skid and struggling for dear life.  These are some of the reasons why you have to love the NFL.  Nobody ever knows what is going to happen next.

After Week 5, here is the scoreboard.

END_OF_DOCUMENT_TOKEN_TO_BE_REPLACED

Photo courtesy of sports.gearlive.com. After Jim Harbaugh (pictured above) did the unthinkable and rebuilt the Stanford football program, he is at it again. Only this time, at the professional level.

What if I told you in the beginning of the season that by week six, the Lions would be 5-0, and the Bills and the 49ers would be 4-1? Would you have called me crazy? I would have called myself crazy.

That’s what is so great about the NFL though, you just never know. Yet here we are, five weeks gone, and all these teams are surprising everyone. Matthew Stafford is transforming himself into an elite quarterback, Fred Jackson has become an MVP candidate, and Jim Harbaugh has completely turned around the 49ers.

It wasn’t long ago that all three of these teams were lost and unsure of what direction to go. It’s amazing what a difference a year makes. END_OF_DOCUMENT_TOKEN_TO_BE_REPLACED