By Josh Kramer It is no secret that things have not been great for the Cleveland Indians over the past couple of weeks.  The Tribe heading into tonight had lost three straight games, including seven of ten, plus they sat 1.5 … Continue reading →

By Josh Kramer Sure the MLB Trade Deadline has been a bit overshadowed by the wild week in the NFL.  Well in the past couple of days, two of the best teams not only in the NL, but in all … Continue reading →

Sproles an upgrade to Bush?

Photo courtesy of realfootballanalysis.blogspot.com. Darren Sproles (pictured above) is heading to New Orleans. Is he an upgrade from Reggie Bush?

There is a new running back heading to Bourbon Street to help continue the fireworks that have defined the Saints offense over the past few years.  Drew Brees, one of the elite quarterbacks in the NFL was not shy in expressing his excitement over the New Orlean’s pick-up today.

Darren Sproles or Reggie Bush?  That is the question.

Both backs are extremely similar in style and what they bring to the table.  They are both “smaller” speed backs that also pose a threat as a receiver and a return man.  They typify what it means to be a multi-purpose running back in this day and age.

Lets take a look at the tale of the tape. END_OF_DOCUMENT_TOKEN_TO_BE_REPLACED

Photo courtesy of nflgridirongab.com. Arguably the biggest prize of the free agent class, Nnamdi Asomugha (pictured above) should find a home in the very near future. Could it be with the New York Jets?

Revis Island might become a part of a greater archipelago if the New York Jets are successful in their pursuit of one of the biggest prizes in this free agency bonanza.

Cornerback Nnamdi Asomugha, who has spent the past eight seasons (seven of which were losing seasons, save for last year’s 8-8 mark) with the Oakland Raiders, is the prototypical shutdown corner and could be the last key to completing the Jets’ quest for a Super Bowl.

And the Jets’ hopes of landing Asomugha, a three-time Pro Bowler, were given a boost Thursday when the Houston Texans, one of Asomugha’s leading suitors and a team capable of offering the free agent about twice as much money as the Jets, opted to sign Johnathan Joseph instead. END_OF_DOCUMENT_TOKEN_TO_BE_REPLACED

Belichick: A coach or a babysitter?

The Patriots stole the show today in another wild and crazy day for the NFL.  Normally the Patriots get attention  and steal the limelight for winning on the field.  They also have a history of winning with off-season transactions as well though.  During the course of the same day, they picked up two former Pro Bowlers for highly discounted rates.  Now I am not saying that we are going to see the Albert Haynesworth of 2008 or the OchoCinco, of the pre OchoCinco era (Johnson days).  I do know that this is a win/win situation once again for the Patriots.  Kraft, Belichick, and Co. are masterminds transactions wise and understand that players want to come play for them.  Go figure that players would want to go play in bitterly cold Foxborough.  There must be something in the water.

But the real question I have about all of this is not whether the Patriots will be a playoff team, because that is basically a no brainer.  The real question is should Bill Belichick sign up for the “Babysitter’s Club?” END_OF_DOCUMENT_TOKEN_TO_BE_REPLACED

Donovan McNabb to the Vikings. END_OF_DOCUMENT_TOKEN_TO_BE_REPLACED

And so it begins 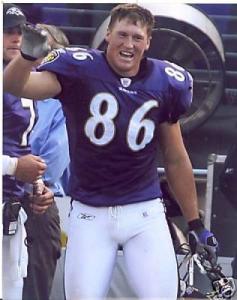 Photo courtesy of signedautograph.com. Todd Heap (pictured above) was one of the more surprising cuts thus far in the current free agency bonanza.

All parties involved begged for it, and now they got it.  NFL football, after the longest work stoppage in League history is officially back.  And the wildest free agency bonanza that we will probably ever get to witness in our lifetime is on.  And yes, this will top last July’s epic, “Decision.”  Though the lockout was just lifted yesterday, there has already been action galore.  And I must say, the cuts have surprised me.

Three teams that are expected to be major contenders this year have stolen the show with a couple of surprising cuts/releases of players in my eyes.

Photo courtesy of usatoday.com. Drew Stubbs (pictured above) needs to utilize his speed more rather than his power.

Yesterday was a wild day.  With the lifting of the NFL Lockout, all seems to be right in the world again.  Strap in for what may be the craziest free agency period you will ever get to witness in any sport during your life time.  Here are the headlines that have caught my attention.

To bunt or not to bunt?

It is frightening to me when I see guys in the MLB who cannot bunt.  When a guy with the abilities of Drew Stubbs cannot bunt, I want to jump off of a cliff.  Stubbs is one of the ten fastest guys in baseball and without question the speediest guy on the Cincinnati roster, yet he does not possess the ability to bunt at this time. END_OF_DOCUMENT_TOKEN_TO_BE_REPLACED

By Grant Freking Since the Mets are in Cincinnati for a four-game series starting Monday night, now seems like a perfect time to examine whether Reds general manager Walt Jocketty should pull the trigger on a deal for Carlos Beltran. Why … Continue reading →

Photo courtesy of turnonthejets.com. Bart Scott (pictured above) is one of many people that "Can't Wait" for the NFL to return.

In the words of Jay-Z, “On to the next one.”  Last week was great, but this week has a whole lot of promise as well.  What should you be on the lookout for?

5.  Did you know that the Women’s World Cup of Softball is going on?  Well if you didn’t, now you do.  I cannot get over how poorly publicized this event has been.  But it is not too late to tune in and enjoy the fun.  Plus, the US exacted some revenge on Japan Saturday for the heartbreaking loss in soccer last weekend.  Sure Jennie Finch is no more, but the US women are still very good.  Try to tune in to the championship game tonight as the US women look to secure a 5th straight World Cup title. END_OF_DOCUMENT_TOKEN_TO_BE_REPLACED