By Josh Kramer How many times have you heard a person say that baseball is too boring?  That baseball is a sport in which it is impossible to watch a full game on television?  A sport that is longer the American pastime? I am sure you have … Continue reading →

Photo courtesy of CollegeFootballPerformance.com. Taylor Martinez (pictured above) and the Nebraska Cornhuskers get their first taste of the Big Ten in Camp Randall on Saturday night.

Though it is very hard to believe, we are already four weeks in, and week five begins tonight.  As has been the case for a good few years now, Boise State once again is being brought up in the National Championship Game discussion.  If Kellen and the blue squad win out, will they get an invitation to Bourbon Street?  In addition, Michigan is 4 and 0 for a third consecutive year.  Can Denard and the Big Blue keep it going through a brutal Big Ten schedule?  And lastly, there are two SEC teams that appear to have a great shot of making the National Title Game (Alabama, LSU).  The SEC seems primed to bring home a 6th straight BCS National Championship.

Here are the marquee matchups. 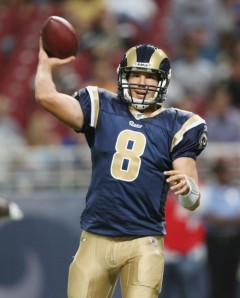 Photo courtesy of PigskinBuzz.com. Heavy expectations were placed on the shoulders of second-year starter Sam Bradford (pictured above) and the St. Louis Rams. The first three weeks have not gone as planned for Bradford and the boys.

Week three of the NFL season has come and gone, and football fans were in for a treat. It was a week in which streaks were broken, and games went down to the wire.

Both the Bills and Lions, two of the seasons biggest surprises, have not made the playoffs since 1999. Sunday was another step in that direction as they both improved to 3-0. The Lions won in Minnesota, 26-23, a place where they hadn’t won in 13 years, while the Bills snapped a 15 game losing streak against the Patriots. What makes both of these teams so fun to watch is the fact they play with no fear and think they can beat anybody in the league. Both of them overcame 20 point deficits on Sunday to remain undefeated, and the bandwagon for both of these teams is growing.

Jump on now while you have the chance. END_OF_DOCUMENT_TOKEN_TO_BE_REPLACED

Photo courtesy of LakersTopbuzz.com. Derek Fisher (pictured above) is the President of the NBA Players Association. If there is any hope of an NBA season in 2011/2012, we better start seeing more of him along with other NBA player representatives and fast.

We just witnessed the best NFL weekend of the year by far.  College Football was also very exciting.  And we are hitting the end of September, which means the end of the MLB regular season.  There is so much going on and so much to talk about.  Here are the main items that have caught my attention.

Is no news good news?

I have always been a firm believer in the expression, “No news is good news.”  Generally, when one stays out of the news, one is staying out of trouble.  People thirst to read and hear about controversy.  Bad news is what normally engulfs the news in our society.

Well today is the 89th day of the NBA lockout.  And I must say that the second professional sports lockout of the year has been far more quiet than the first.  As you are all more than aware, the NFL experienced the longest lockout in the history of the League, spanning over 136 days.  And for nearly all 136 of the days, there was immense coverage by all of the sporting networks.  That has been far from the case regarding the NBA lockout.  Mainly we have just been hearing about players looking to lock down lavish contracts overseas.  Has all hope been lost on the 2011/2012 NBA season? END_OF_DOCUMENT_TOKEN_TO_BE_REPLACED 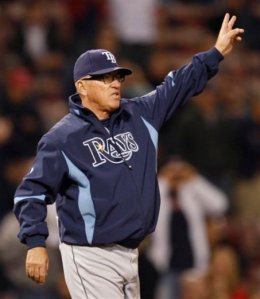 Photo courtesy of PennLive.com. Regardless of the final outcome, Joe Maddon (pictured above) is the AL Manager of the Year. It has been a remarkable run by Tampa.

It is safe to say that this past weekend was the wildest weekend of football thus far this season hands down.  College football was full of nail biters.  And the NFL was full of surprises.  Plus the MLB pennant races continue to heat up as both the Red Sox and Braves do all in their power to survive their monumental September collapses (each up 1 game for the Wild Card at this time).

Here are the events you should keep an eye on.

5.  NHL preseason hockey is alive and well.  Even Sid “The Kid” Crosby has made his long-awaited return to game play (scrimmage).  And with the NBA in dire trouble, the NHL has to be smiling in that they will not have to compete with the National Basketball League for at least part of the season.  After last year’s amazing playoffs, which featured four game 7’s in the first round alone, and an epic Stanley Cup Finals, the NHL popularity could soar to unprecedented heights this year. END_OF_DOCUMENT_TOKEN_TO_BE_REPLACED

Shut the door on Week 4 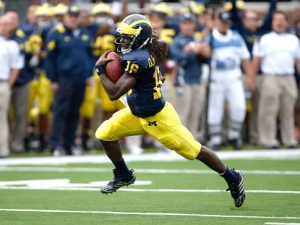 Photo courtesy of TheWolverineBlog.com. On a day filled with excitement, Michigan QB Denard Robinson (pictured above) stole the show with his legs.

The College Football season is about a third of the way in, and I for one have not been disappointed.  Big time players and big time teams have lived up to the hype thus far.  Primetime matchups have turned into classics.  And there is a still a whole lot more of where that came from on the way.  Who cares about conference realignment.  Let’s just enjoy the current system, while we still have it. 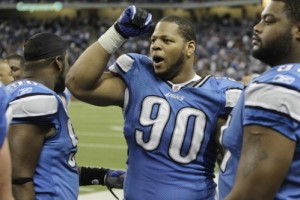 Photo courtesy of Detroit Lions Weblog. Ndamukong Suh (pictured above) and the Lions defense have played a large part in Detroit's exciting 2 and 0 start.

Week three of the NFL season approaches and I think it could be one of the defining weeks of the season. The first two weeks of the NFL season have been an offensive explosion, but should it be considered an “offensive explosion” or a “defensive implosion?” As everyone knows, the NFL suffered through a prolonged lockout, which prevented teams from going through with their customary off-season workouts. Offensive players got together and worked on things and it seems to have benefited them, but the defenses are far behind.  Teams such as the Detroit Lions and Buffalo Bills, who have typically been two of the bottom feeders of the NFL have become virtually unstoppable over night. It’s widely known that defenses will be ahead of offenses at the beginning of the season, but this year that has not been the case. END_OF_DOCUMENT_TOKEN_TO_BE_REPLACED