A night for the ages 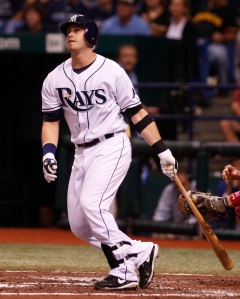 Photo courtesy of graphicshunt.com. Evan Longoria (pictured above) capped off an amazing night in baseball with a walk-off homer in the 12th to beat the Yankees and knock the Red Sox out of postseason contention.

How many times have you heard a person say that baseball is too boring?  That baseball is a sport in which it is impossible to watch a full game on television?  A sport that is longer the American pastime?

I am sure you have heard all of these statements numerous times.  Sure the NFL is hands down the most popular professional sports league in America these days.  And sure the NBA has leapfrogged the MLB in popularity (maybe not for long), but last night was absolutely epic.  You want excitement, down to the wire finishes, unpredictability.  Well all that and more occurred last night in arguably the greatest night of baseball in the last 25 years.

Sure there have been plenty of exciting moments during my lifetime in baseball that I will never forget.

Just to name a few:

-Joe Carter ends the 1993 World Series with an unforgettable walk-off homer off of Philadelphia closer Mitch Williams on October 23, 1993.

-The September 8, 1998 game where Mark McGwire forever (or so we thought) flexed his muscles to just put a ball over the left-field wall for his 62nd home run.

-On November 4, 2001, Luis Gonzalez hits a nubber just over the drawn in Yankee infield to bring in the winning run during Game 7 of the World Series against the greatest closer of all time, Mariano Rivera.

-The infamous Steve Bartman bonanza at Wrigley on October 14, 2003.

-The Aaron Boone walk-off homer on October 17, 2003 to break the hearts of Red Sox fans yet again (little did they know what would happen in 2004).

These are just a few examples of some of the most memorable moments in baseball history during my lifetime.

Well last nights cumulation of events may have topped all of these great nights.  Tampa came into September down 9 games behind Boston and seemingly ready to start preparing for next year.  St. Louis found themselves in a very similar position down by 8.5 games at the beginning of September for the NL Wild Card.

During the course of a 129 minute period last night, everything that was thought to be impossible came true.

-At 9:56PM, Atlanta blows a 9th inning lead against the Phillies and heads for extra innings.

-The Rays score their first run of the game and now are only down 8 to 1 in the 8th inning against the Yankees at 10:17PM.

-Cardinals finish off an 8 to 0 victory against the Houston Astros at 10:26PM.

-Little known Tampa Bay pinch hitter, Dan Johnson, a man who has not homered since April 11th, sends one into the seats to tie the game at 7 in Tampa at 10:47PM.

-Hunter Pence, the best midseason pickup of them all in my opinion, gives the Phillies the lead over the Braves with a blooper in the 13th at 11:28PM.

-Phillies officially win the game and rip the hearts out of the Braves Nation at 11:40PM.

-Little known Baltimore Orioles’ outfielder, Nolan Reimold, doubles to tie the game in the bottom of the 9th inning.  This is Papelbon’s 3rd blown save of the entire season, in 34 attempts (11:59PM).

-Robert Andino hits a single to give Baltimore an unthinkable 4 to 3 victory over the Red Sox to cap off one of the worst September months in baseball history (for Boston) at 12:02PM.

-Evan Longoria, launches his second homer of the night to give the Rays one of the craziest victories in the history of baseball, 8 to 7, in 12 innings at 12:05PM.

All of this madness led to the Braves and Red Sox going home, and the Cardinals and Rays headed to the postseason.

Do you believe in miracles?  Last night may not have been a miracle, but the swing of events was absolutely unbelievable.  It was a culmination of one of the wildest September months in MLB history.

15 responses to “A night for the ages”