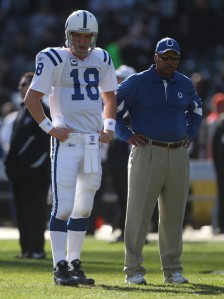 Photo courtesy of zimbio.com. All eyes are focused on Jim Caldwell (right) and the Indianapolis Colts as they head into the opener without their franchise player, Peyton Manning (left).

Who has had the sweetest gig in the NFL since 2009? Most people would say Jim Caldwell. He inherited a former Super Bowl champion Indianapolis Colts team with its core still intact, more importantly the team had Peyton Manning as their quarterback. Manning is frequently referred to as the teams “coach on the field” or it’s Offensive Coordinator due to his in-depth knowledge of the playbook and his infamous routine at the line of scrimmage where he chooses a play to call from a set of three. This relieved an immense amount of pressure off of Caldwell and allowed him to not become overwhelmed with the pressure of being a NFL head coach. END_OF_DOCUMENT_TOKEN_TO_BE_REPLACED