Hope provides a glimmer of hope

Posted on July 10, 2011 by kramerj7 | Comments Off on Hope provides a glimmer of hope 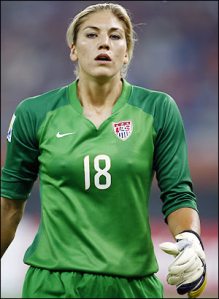 I never thought that I would see the day where a quarterfinal women’s soccer game got the entire country excited.  A finals match sure.  But a quarterfinal?  Well believe it, because today’s match was arguably the greatest soccer match I have ever had the pleasure to witness.  The majority of Americans would agree.

The American women were down and out.  They were down to 10 players.  They were going up against Marta, the best women’s soccer player in the world, and an extremely talented Brazilian team that had knocked them out 4 years ago.  It was stoppage time.  And somehow, the American women, led by Abby Wambach and Hope Solo never lost “hope.”  Ever heard the expression “Only in America.”  Well today, though the match was all the way over in Germany, it seemed to be one of those “Only in America” type of moments. END_OF_DOCUMENT_TOKEN_TO_BE_REPLACED

Comments Off on Hope provides a glimmer of hope