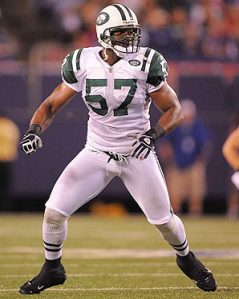 Photo courtesy of turnonthejets.com. Bart Scott (pictured above) is one of many people that "Can't Wait" for the NFL to return.

In the words of Jay-Z, “On to the next one.”  Last week was great, but this week has a whole lot of promise as well.  What should you be on the lookout for?

5.  Did you know that the Women’s World Cup of Softball is going on?  Well if you didn’t, now you do.  I cannot get over how poorly publicized this event has been.  But it is not too late to tune in and enjoy the fun.  Plus, the US exacted some revenge on Japan Saturday for the heartbreaking loss in soccer last weekend.  Sure Jennie Finch is no more, but the US women are still very good.  Try to tune in to the championship game tonight as the US women look to secure a 5th straight World Cup title.

4.  Many of the best players in tennis will be heading to LA for the always exciting Farmers Classic held at UCLA’s Straus Stadium.  This is a final tune up for the brutal month of August that really defines American tennis.  Primetime events occur in DC, Montreal, Cincinnati, and of course New York.  It is time for the hard court season stretch run.  The Farmers Classic will be a good precursor and show us if any American men are destined to make some noise during the wild August stretch.  Is there any American hope?  We can only pray.

3.  After yesterday’s outstanding Hall of Fame class was inducted, we focus again on the present.  There are some great matchups this week as the central divisions in both the American and National League take center stage.  Largely, this is due to the mediocrity of each division, but mediocrity leads to parity, which can lead to a cluster.  Clusters mean numerous contenders.  Both division have four teams in contention apiece.  My matchup of the week though ignores the central divisions and focuses on the NL East and NL West.

San Francisco Giants at Philadelphia Phillies:  Two of the NL’s best go head to head in the city of brotherly love.  Many are counting on this to once again be the NLCS matchup come October.  It is a definite possibility the way that both squads are playing.  Though I feel the results would be different this year, it would still be a great series.  Pitching wins championships.  And both of these first place teams embrace that age-old concept.

San Francisco and Philadelphia both lead all of baseball in team ERA and opponents batting average.  Each team has multiple guys that will definitely receive some consideration for Cy Young honors at the end of the year.  Though the Giants dodge a bullet and miss out on facing Roy Halladay, I like the Phillies chances to take two of three in this series.  Philadelphia sports the second best home record in all of baseball behind Milwaukee and I fully expect them to protect Citizens Bank park in this crucial series.

2.  Also within the topic of baseball, Sunday will mark the MLB trade deadline.  This can only mean one thing.  Player movement galore.  And though the market this year is nothing to brag about, it could still make a difference.  Expect many of the contenders to buy and many of the pretenders to sell.  Who will improve?  Who will regress?  We will know all by Sunday at midnight.

1.  Have you ever heard the saying, “Rome wasn’t built in a day.”  Well Rome was not built in a day, but the NFL is about to be rebuilt over a few day period.  The free agency bonanza that is about to ensue will be one of the most unforgettable couple of days transactions wise ever.  It will rival what the “Decision” was  last July.  And to top it off, it will intersect with the always exciting MLB trade deadline.  Make sure you strap in, because it is going to be a bumpy ride.  In the words of Bart Scott, “Can’t wait!”