After a long off-season in which there were questions as to whether or not there would be a season in 2011, the NFL is back, and better than ever. Following the conclusion of the lockout, it was madness in the NFL, with big names such as Chad Ochocinco, Albert Haynesworth, Nnamdi Asomugha, and Donovan McNabb all on new teams. That’s just to name a few.

Heading into the season, teams such as the Patriots and Eagles are in a Super Bowl or bust mentality. These two teams have been the story of the off-season, with the Patriots landing Chad Ochocinco, Shaun Ellis, and Albert Haynesworth, while the Eagles landed Nnamdi Asomugha, and Ronnie Brown, among others.

It seems to me that people are forgetting about the team that won the Super Bowl last season, the Green Bay Packers. They didn’t make noise in free agency, but don’t forget they were without Ryan Grant and Jermichael Finley during their Super Bowl run.

Without further ado, here are my NFL power rankings heading into the 2011 season.

END_OF_DOCUMENT_TOKEN_TO_BE_REPLACED 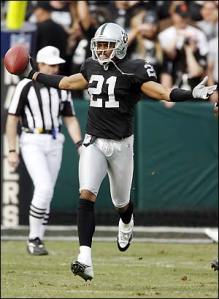 Photo courtesy of nflgridirongab.com. Arguably the biggest prize of the free agent class, Nnamdi Asomugha (pictured above) should find a home in the very near future. Could it be with the New York Jets?

Revis Island might become a part of a greater archipelago if the New York Jets are successful in their pursuit of one of the biggest prizes in this free agency bonanza.

Cornerback Nnamdi Asomugha, who has spent the past eight seasons (seven of which were losing seasons, save for last year’s 8-8 mark) with the Oakland Raiders, is the prototypical shutdown corner and could be the last key to completing the Jets’ quest for a Super Bowl.

And the Jets’ hopes of landing Asomugha, a three-time Pro Bowler, were given a boost Thursday when the Houston Texans, one of Asomugha’s leading suitors and a team capable of offering the free agent about twice as much money as the Jets, opted to sign Johnathan Joseph instead. END_OF_DOCUMENT_TOKEN_TO_BE_REPLACED