Photo courtesy of zimbio.com. Jake Locker (pictured above) will be the Tennessee Titans starting quarterback in the season opener against New England.

Preseason NFL football has turned into “Quarterback Gossip Central.”  Where is the media attention for the cornerback competitions?  Or how about the many wide receiver battles?  I guess it makes sense though.  There is no position of more importance to a football team than the quarterback.  Plus, there can only be one starter per team.  Let’s go around the League and delve into a couple of the current “Quarterback Controversies.”

Recently, it was announced that Jake Locker will be the starter in Tennessee for opening night against the New England Patriots.  Is anyone really surprised though?  Sure, Matt Hasselbeck has been in the League since 1999, but Jake Locker was a first-round draft pick.  When a quarterback is selected in the first-round, they are expected to start within two years of being drafted.  It’s the way it is.  Hasselbeck can still play, but he is far past his prime at the ripe age of 36.  Plus, Locker is 24-years-old and oozing with talent. END_OF_DOCUMENT_TOKEN_TO_BE_REPLACED

Photo courtesy of zimbio.com. Matt Flynn (pictured above) is going toe to toe with Russell Wilson for the starting quarterback job in Seattle.

They say competition is healthy. When NFL training camps open, the hot topic always centers on who will win the starting job. Not at running back, not at wide receiver, but at quarterback of course.

There are several teams with quarterback competitions at full speed as the second week of preseason approaches. Ironically, quarterback uncertainty is plaguing the same franchises every season. Teams like the Green Bay Packers, New England Patriots, New Orleans Saints, and New York Giants, among others have had the quarterback position nailed down with their Pro Bowl throwers, making them oblivious to what it’s like to have a competition for the top spot on the depth chart. For other teams like the Seattle Seahawks, Arizona Cardinals, Tennessee Titans, and Miami Dolphins, the coaching staff does not have that luxury and all they can do is hope they make the right decision.

These four situations may not be black and white, so here is my analysis of which quarterback is the best fit under center for their respective teams.

4. Seattle Seahawks: Pete Carroll has one of the more interesting competitions to focus on in the NFL. Management went out in the offseason and signed free agent Matt Flynn to a nice contract after he showed unique abilities in Green Bay. The question becomes, is Flynn really a franchise guy, or was he only the product of an efficient system under Mike McCarthy? The only way to find out is to put him to the test this preseason. The other player in the mix is rookie Russell Wilson, who on paper doesn’t look like a viable option (Tarvaris Jackson seems to have faded out of the race for the starting spot). But the more and more you watch him you see what kind of athlete he really is, and he really makes you want to give him the reigns. My prognosis, start Flynn. I think his abilities are sufficient, and if he really does fail to win games, then go to Wilson. The Seahawks defense should win them games anyway. END_OF_DOCUMENT_TOKEN_TO_BE_REPLACED

Photo courtesy of bearsgab.com. Jay Cutler (pictured above) will likely be sidelined for the rest of the regular season. How will the Bears respond without their offensive leader?

Last week it was Matt Schaub who was lost for the season with a foot injury, just when the Texans looked like they were getting it all together. A week later, it’s Jay Cutler who will likely miss the remainder of the regular season with a broken thumb on his throwing hand that will require surgery. This couldn’t come at a worse time for a Bears team who have five straight games and look like a legitimate threat to the Packers. Now, that talk will have to wait, as the Bears turn to Caleb Hanie, and pray he can lead them back to the playoffs.

1. Green Bay Packers (1, won 35-26): 10-0. Next up, the Packers get their biggest test of the season yet: In Detroit, on Thanksgiving. (Next game: at Detroit) END_OF_DOCUMENT_TOKEN_TO_BE_REPLACED

Photo courtesy of sports.popcrunch.com. The Colts enter Sunday without Peyton Manning (pictured above) under center for the first time since December 21, 1997.

The NFL is back in full force.  After watching the Packers/Saints shootout last night, I know everyone is excited for the first NFL Sunday of this very anxiously awaited season.  Despite the longest lockout in the history of the League, the NFL’s popularity appears to be at an all-time high.

Last season, I had a pick’em challenge with one of my good buddies CV3.  This year, we have added two new players to the 2nd annual “TheSportsKraze Pick’em Challenge.”

DC-David Clark-A dedicated sports fan who was coached by TheSportsKraze on his fraternity flag football team.  After playing for TheSportsKraze, he has developed a slow but steady motivation to show his coach who the real pick’em champion is. END_OF_DOCUMENT_TOKEN_TO_BE_REPLACED

Show me the money

Photo courtesy of inquisitr.com. Chris Johnson (pictured above) is in the midst of a major conflict situation with Tennessee Titans ownership.

The Tennessee Titans are on edge. The state of Tennessee is on edge.  And most of all, Fantasy Football owners are on edge.  The Chris Johnson lockout continues as teams get ready for Week 3 of preseason football.  And sure, arguably the best running back in the game today, or at least the most explosive, will more than likely be suited up for the opener in Jacksonville on the 10th anniversary of 9/11.

But what if CJ does not sign in the near future?  What if Mike Reinfeldt (Titans GM) and Chris Johnson cannot come to an agreement?  Opening night is less than three weeks away.  There were no OTA’s this year due to the lockout.  There was no extra reps for the majority of the guys.  Training camp and preseason games are of more importance this year than they have ever been.  Not to mention Tennessee will have a new quarterback under center this year (Matt Hasselbeck).

Well Chris Johnson is not taking part in any of it.  CJ has been hanging out with Mickey Mouse in Orlando. END_OF_DOCUMENT_TOKEN_TO_BE_REPLACED 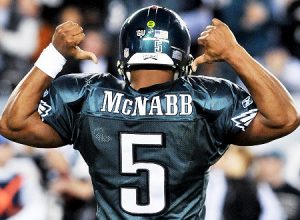 Donovan McNabb to the Vikings. END_OF_DOCUMENT_TOKEN_TO_BE_REPLACED 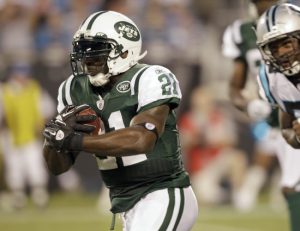 Can my Preseason Super Bowl Pick pull off the unthinkable and shock the Patriots in Foxborough? LaDainian Tomlinson (pictured above) will be a key to the Jet's success on Sunday.

Our very own Wesley Kaminsky has already given his predictions for this weekend’s slate of NFL games.  Now it is my turn.  Last week had some great football games, highlighted by the shocker in Seattle.  Marshawn Lynch’s run was arguably the greatest rushing attempt I have ever witnessed in my life.  After making a play like that, you had to believe that destiny was on Seattle’s side.

This week the matchups appear to be even better.  Lets take a closer look. END_OF_DOCUMENT_TOKEN_TO_BE_REPLACED