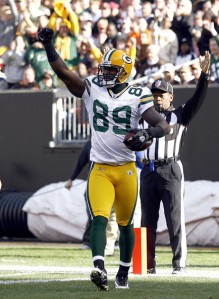 Photo courtesy of zimbio.com. James Jones (pictured above) had a huge game in Detroit on Thanksgiviing. Can the defending champs do the unthinkable and complete a perfect season?

With five games to go in the 2011 NFL season, the Green Bay Packers have remained undefeated and got past their biggest test on Thanksgiving with ease. That defense, which was supposed to get lit up against a high-powered Lions offense didn’t by any means, as they picked off Matthew Stafford three times.

And that Aaron Rodgers guy? He continued to play at an MVP level as he threw for 307 yards, and two touchdowns. Can any team in the NFC stop the Packers from returning to the Super Bowl? It’s going to be pretty difficult to try to do that at Lambeau Field during the playoffs. Aside from the Saints, I can’t see any team winning there.

The Packers have had the top spot of these power rankings since Week 1, and they don’t look like they are going to give it up anytime soon.

2. New England Patriots (3, won 38-20): 8-3. Tom Brady continues to prove why he is still right up there as the leagues best quarterback with Aaron Rodgers. He put on a clinic in Philly. (Next game: vs. Indianapolis)

4. Baltimore Ravens (5, won 16-6): 8-3. The Ravens won the “Harbowl” and their attention now turns to securing the AFC North title. The Steelers are right there. (Next game: at Cleveland)

6. Pittsburgh Steelers (6, won 13-9): 8-3. Last game was much closer than the Steelers would have liked it to be, but Arrowhead is never an easy place to play. They need to continue winning to keep pace with the Ravens. (Next game: vs. Cincinnati)

8. Dallas Cowboys (11, won 20-19): 7-4. The Cowboys avoided a near disaster on Thanksgiving, but came away with their fourth straight victory. Tony Romo regrouped after a rough start to the game. (Next game: at Arizona)

9. Oakland Raiders (14, won 25-19): 7-4. The Raiders won last game thanks to the foot of Sebastian Janikowski, who drilled six field goals against the Bears. Next up, they get a gritty Dolphins team in Miami. That won’t be easy. (Next game: at Miami)

10. Atlanta Falcons (12, won 24-14): 7-4. Something tells me that at the end of the season, that overtime loss to the Saints is going to come back and sting–big time. But for now, they’re sitting with the final wild card spot in the NFC. (Next game: at Houston)

11. Chicago Bears (7, lost 25-19): 7-4. Caleb Hanie struggled in his first start as expected, but with a soft schedule the rest of the way, the Bears are still in position to get a wild card spot. (Next game: vs. Kansas City)

13. Cincinnati Bengals (13, won 23-20): 7-4. They may have saved their season with a come from behind victory over the Browns. Next up, they try to get revenge as they travel to Heinz Field to play the Steelers. (Next game: at Pittsburgh)

16. New York Jets (16, won 28-24): 6-5. The Jets had no business winning that game against the Bills, but those are the games they tend to win. Still, Jets fans can’t be too optimistic for the rest of the season. (Next game: at Washington)

18. Buffalo Bills (22, lost 28-24): 5-6. Stevie Johnson’s drop cost the Bills the game in New York, as well as their season. What a disappointment the Bills have been after such a bright start. (Next game: vs. Tennessee)

21. Tampa Bay Buccaneers (20, lost 23-17): 4-7. Josh Freeman has regressed this season in a big way. I’m not sure Raheem Morris survives this disappointing season. (Next game: vs. Carolina)

27. Kansas City Chiefs (26, lost 13-9): 4-7. Tyler Palko’s first two starts of his NFL career have been rough: The Patriots, followed by the Steelers. You have to think that the Kyle Orton era will begin next week in Chicago. (Next game: at Chicago)