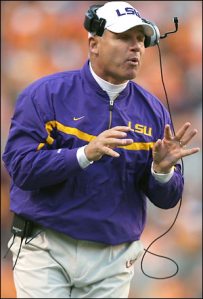 Photo courtesy of coacheshotseat.com. Can Les Miles (pictured above) pull a rabbit out of his hat and lead his Tigers over the Crimson Tide in Tuscaloosa on Saturday night?

Halloween is always a wild time for obvious reasons.  It is the one time of year where you can dress however you want and go unnoticed.  This weekend though, was highly noticeable in terms of the wide world of sports.  Saturday night was arguably the best night of College Football we have had all year.  Sunday was full of thrills and surprises.  And the Fall Classic had its first Game 7 since 2002.

Here are the events to keep an eye on this week.

5.  So a month of games are gone.  That is a shame for sure, but at least some progress was temporarily made.  The insanity and chaos that I witnessed at the end of last week into this weekend demonstrated to me that we have a very good shot of at least having a partial season.  Both sides want to make this deal happen.  It is just a matter of getting over the 2% conflict.  If I had to guess, I would say we will be seeing the game’s biggest stars by January.  This is a bummer in that the Christmas lineup was set to be epic.

4.  The Sprint Cup Chase for the Cup has hit the stretch run.  With only three races left, Jimmie Johnson’s attempt at a six-peat is in dire jeopardy.  Can the sports’ biggest name shock the world and do the unthinkable for a 6th consecutive year?  Considering he only has two wins on the year, and currently finds himself in 6th place, I am going to go with very doubtful.  But anything can happen.  A victory at Texas Motor Speedway would be huge next weekend for Johnson.

3.  Both of last year’s Stanley Cup participants are off to a slow start.  Boston finds themselves occupying the cellar in the Northeast while Vancouver is one spot away from last in the Northwest.  Phil Kessel continues to steal the show in leading the League in all the major offensive categories while his team, Toronto, resides in the Northeast’s top spot.  Here is the matchup of the week.

Philadelphia Flyers at Buffalo Sabres: Both of these teams currently find themselves in second place in their respective divisions.  In order to take that next step and nab the number one spot, they need to make a statement.  Well this game is a statement opportunity for both squads.

This is your classic offensive versus defensive throw down.  Philadelphia features one of the League’s elite offensive units while Buffalo has a very stingy defense.  Buffalo and Philadelphia have both played better on the road thus far in the young season.  And due to this simple fact, I am taking the road team to handle business on Wednesday night.

2.   Didn’t the owners and players finally come to a consensus on a new CBA like yesterday?  Well at least it feels that way as we near the half-way point of the regular season.  And despite a lack of OTAs, the level of play has been as good as ever.  Hopefully there is no wear down in the second half of the year.  Week 8 of NFL football is nearly in the books, but what should be a great Week 9 is right around the corner.

-Baltimore at Pittsburgh (This game is most definitely a rivalry game)

1.  The game everyone has been waiting for is finally here.  This past Saturday, especially the evening portion was amazing, but fans across the country have had November 5th circled on their calendars for some time now.  Well have no fear, the big game is finally here.  And despite the majority of the country focused in on Tuscaloosa, there are plenty of other major matchups as well.

-Kansas State at Oklahoma State (Upset alert in the Big 12?)