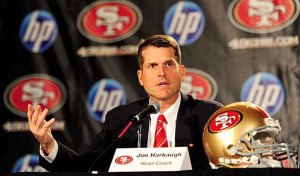 Photo courtesy of sports.gearlive.com. After Jim Harbaugh (pictured above) did the unthinkable and rebuilt the Stanford football program, he is at it again. Only this time, at the professional level.

What if I told you in the beginning of the season that by week six, the Lions would be 5-0, and the Bills and the 49ers would be 4-1? Would you have called me crazy? I would have called myself crazy.

That’s what is so great about the NFL though, you just never know. Yet here we are, five weeks gone, and all these teams are surprising everyone. Matthew Stafford is transforming himself into an elite quarterback, Fred Jackson has become an MVP candidate, and Jim Harbaugh has completely turned around the 49ers.

It wasn’t long ago that all three of these teams were lost and unsure of what direction to go. It’s amazing what a difference a year makes. END_OF_DOCUMENT_TOKEN_TO_BE_REPLACED