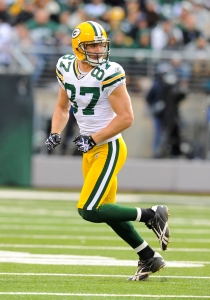 Photo courtesy of fantasyfootballhelp.com. Not too many people are talking about the lone undefeated team in the NFL after six weeks. Green Bay has been simply outstanding riding guys such as Jordy Nelson (pictured above) to easy victories.

Week six is in the books, and it consisted of drama–and lots of it. Some of it wasn’t even on the field itself. Following the 49ers comeback victory in Detroit, Jim Harbaugh was excited, and fiery. Apparently Lions coach Jim Schwartz didn’t like how Harbaugh shook his hand, as he continued to yell at the Niners coach all the way down the field. The two had to be broken up as they were heading into the tunnel.

If you don’t know anything about Jim Harbaugh, that’s just his personality. He does things his way and doesn’t care what people say about him. Remember while at Stanford when Pete Carroll famously asked Harbaugh, “what’s your deal?”  Do you think Harbaugh looks like the kind of guy who cares how he is perceived?

No coach has done a better job this season than him either. After inheriting a 6-10 49er’s team, and having a limited off-season due to the lockout, Harbaugh has brought football back in San Francisco. He has done with Alex Smith what neither Mike Nolan, or Mike Singletary was able to do; make him a quarterback.

There’s just something about this Harbaugh guy. END_OF_DOCUMENT_TOKEN_TO_BE_REPLACED

Photo courtesy of businessinsider.com. The cat fight between Carson Palmer (left) and Mike Brown (right) is finally over. Both sides seem to have come out on top.

Typically, the NFL trade deadline is not the most eventful day.  It is normally relatively quiet and does not come close to rivaling the always exciting MLB trade deadline at the end of July. Today though, the show was stolen from a very unlikely source.  I am of course referring to none other than arguably the most hated owner in all of professional sports, Mike Brown.  In quite possibly the trade of the year, the Cincinnati Bengals rid themselves of Carson Palmer for a first round pick in 2012 and a conditional second rounder (that could become a first rounder) in 2013. END_OF_DOCUMENT_TOKEN_TO_BE_REPLACED