By Josh Kramer Last night’s ending to the MLB season was a fairy tale ending.  The final night of the season and Game 6 (Thursday)  are two nights that will live on in baseball immortality.  Anybody who wants to say … Continue reading →

Too quick of a whistle 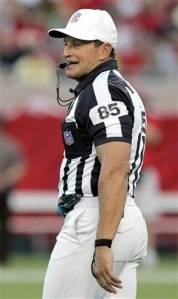 Photo courtesy of tusconcitizen.com. Are NFL referees to quick with the whistle in terms of roughing the passer penalties?

Daily I hear that the NFL has gotten soft.  That the league is taking the aggressiveness out of football. This is true especially when it comes to the quarterback.  You can barely touch the field general without it being a penalty.  Every week you see a ridiculous roughing the passer penalty that quite frankly makes you sick. There are also many complaints that the calls are not consistent.  That players such as Tom Brady, Peyton Manning and Drew Brees get the penalty flags more frequently than other quarterbacks such as Ben Roethlisberger and Mike Vick. In an interview with ESPN’s Jim Rome, Roethlisberger said, “I think in part because the league doesn’t want certain games to be played without certain quarterbacks,” Roethlisberger continues to say. “No offense to the other Patriots, but whose going to watch the Patriots
without Tom Brady and the Saints without Drew Brees. That’s the way it is. They want to protect those guys because they are the marquee guys of this league, and you don’t want them to get hurt.” Vick also had similar complaints after one of his team’s losses this season. END_OF_DOCUMENT_TOKEN_TO_BE_REPLACED