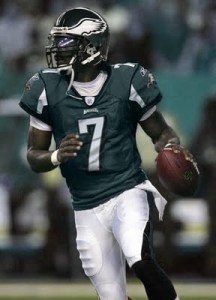 Photo courtesy of allphiladelphiasports.com. Michael Vick (pictured above) and the "Dream Team" appear to have finally found their mojo.

The past few days in the sporting world have been absolutely wild.  Amazing College Football finishes, shocking NFL upsets, and of course the conclusion of what was an epic World Series. The following are the items that have really caught my attention.

-The game of baseball is now a better place.  Okay maybe that is a little bit of a hyperbole, but it is not so far-fetched in my opinion.  Tony LaRussa, the St. Louis Cardinals manager, has called it quits after 33 years as an MLB manager.  And as you all are already more than aware, I have never been shy about my sentiments on LaRussa.  The man is a nuissance, and really hurt the game more than he helped it.  Despite my opinion though, he did put up some outrageous numbers that will forever be in the record books.

-For a guy who in his playing days batted south of the Mendoza line, I think he did pretty well for himself in his post playing days.  I have never been one to question LaRussa’s numbers.  As you can see above, he has had a Hall of Fame caliber career as a manager.  It is the way he went about it that gets me going.

-First of all, it is no secret that he is the ultimate micromanager.  You want a reason why baseball games today go far too long and fans are losing interest?  Tony LaRussa should be exhibit A.  Secondly, when was this man not in the midst of a tift with an opposing manager or team?  In his 33 years as a skipper, you would be extremely hard-pressed to find a full season where there was not at least one instance of controversy with the opposition.  Thirdly, the man condoned steroid usage with the best of them.  You would have to be blind to not notice what Canseco and McGwire were doing in Oakland.  And like many other managers in the 80s and 90s, he turned a blind eye in order to win.  Then lastly, this guy has an arrogancy level that borders that of Rex Ryan.  Talk about a man who thinks he knows more about the game of baseball than Abner Doubleday for crying out loud.  Yet despite all of this amazing knowledge, he could not even remember the name of the World Series opponent in a recent radio interview.  After playing seven wild games against a team, you think that the “smartest” man in baseball would at least know who the opponent was.

-Baseball has lost it’s “smartest” man.  In reality though, it is has now become a better place.  The real question is what will LaRussa do next?  Perhaps invent a sport?

-The “Dream Team” has finally found it’s mojo.  And though it took about two months longer than most people expected it to, the Eagles look to be a playoff contender once again.  In the Jason Garrett era, the Cowboys have been “America’s Team” that cannot win a close game.  For the first time in the Garrett era, they took one on the nose and just got simply spanked.

-Now I am more than aware that there is only one team over .500 in America’s favorite division.  But have no fear, the Eagles are here.  Plus the Cowboys are not too shabby in their own right (outside of Sunday Night’s abysmal performance).  Though this is a great division, I only foresee one playoff team.  Whomever wins the division will play on.  There will be no Wild Cards due to how much these teams beat up on one another.  In a way, the NFC East is the professional version of the SEC.  Very good evenly matched teams who hate each other.  Now I am not saying the NFC East is the top division like the SEC is the top conference.  But you better believe it is up there for being the most entertaining.  With the Eagles finally flying, this race could come down to the final week of the season.

All eyes on Tuscaloosa

-Despite a fantastic Week 9 which was “mighty fine,” all eyes were already focused on Week 10 in the College Football stratosphere even while Ohio State shocked the Spartans and Andrew Luck ripped the hearts out of the Coliseum.  November 5th has been circled on every football fan’s calendar across the country for the better part of two months now.  This is of course the day when the LSU Tigers travel to Tuscaloosa to take on the Alabama Crimson Tide for SEC supremacy.  In essence, many are calling this game the National Championship before the real National Championship.

-I am calling this the “Game of the Year.”  By no means is it the National Championship.  Sure the winner will have the inside track to the SEC Title Game. We all know the SEC’s recent track record with the BCS National Championship Game.  But the SEC is the SEC for a reason.  LSU would still have to beat a very solid Arkansas team, while Alabama still has the defending National Champions (Auburn), looming.  I will admit that I feel like the winner of this game will be the favorite to bring home all the marbles in the end and there are many reasons why all eyes will be on Tuscaloosa come Saturday night.  Yet each team still will have three regular season games and a possible SEC Title game remaining.  Strap in for what should be a war between the two deepest, most talented, and fastest teams in America.  You won’t want to miss it (my prediction to come on Thursday in my weekly College Pick’em).