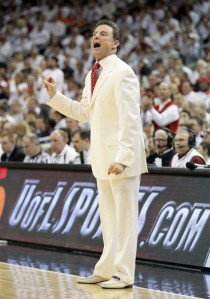 The major problem lies in the certainty of the outcome.  Sure the money and television ratings will be off the charts (which I guess is the most important thing).  But the actual excitement for the viewers of the game will not be there.  Unless they are a part of the Big Blue Nation of course.

Typically with rivalries, numbers and stats get thrown out the window.  So most people feel that this is the “worst” matchup that Kentucky could have gotten.  Many are likening it to Georgetown having to play Villanova in the 1985 championship game.  In this scenario, I don’t agree.  UK and Louisville is arguably the best rivalry in college basketball, making this quite possibly the biggest game in the history of the Commonwealth State.  This UK team is so far ahead of the competition, that the outcome seems to have already been determined before the games even tip.  It would be far more entertaining to watch UK take on the Charlotte Bobcats.

This year’s version of “Calipari’s Traveling All-Stars” is different from his teams of the past.  Not only are they light years ahead of the competition, they lack some of the typical Calipari flaws that his All-Star teams of the past have had.  Calipari has done the best job of his career in getting an outrageously talented team to put personal accolades aside, and buy into a team concept.  Also, unlike teams coached by John Calipari in the past, this team hits their free throws and can hit from long-range.  Their 35 of 37 performance from the charity stripe against Indiana was no fluke.  This team can hit from the free throw line with the best of them.  In addition, guys like Doron Lamb and Darius Miller can hit from the perimeter at very respectable rates (47% and 38% respectively).  They also have a guy named Kyle Wiltjer who has not missed a shot from beyond the arc in a good month it seems.

I also forgot to mention that they have a few other pretty good players like Anthony Davis, Michael Kidd-Gilchrist, and Terrence Jones (all lottery picks come June).  Louisville, Ohio State, and Kansas are very good teams that deserve to be in New Orleans.  This year though, an NBA team appears to have slipped into the field.  The professional squad will be sporting Wildcat Blue on Saturday evening, and then again on Monday night.  Kentucky will cut down the nets in New Orleans.  The only real question is will Ohio State or Kansas claim second place?

923 days is a very long time.  Tiger Woods dealt with it though.  And on Sunday, he looked like his old self not only winning the Arnold Palmer Invitational, but really separating himself from the field.  It was refreshing to see Tiger Woods, the man who was once the “Ultimate Closer,” back to his old ways on the golf course.

Frank Martin has left Kansas State for South Carolina.  I for one am flustered by this decision.  Why would anyone want to go to a place that has been referred to as a graveyard for college hoops?  The Gamecocks have not won a tournament game since the Frank McGuire days in 1973 (39 years).  Also, when it comes to basketball, the Big 12 is typically better than the SEC (at least recently).  I do know better than to question Frank Martin though.  He is one of the scariest figures in college hoops for a reason.

Nick Saban has won National Championships two of the past three years.  And yesterday, he was rewarded in a big way.  Saban will make nearly 45 million over the next eight years in base salary.  This does not even include his “talent fees.”  So much for Alabama being an “Academic” first institution.  I would take over five million dollars a year to coach College Football.  Actually, I would even take one million a year.