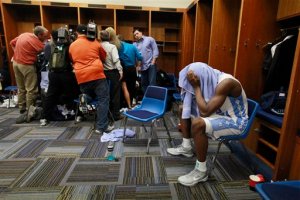 Photo courtesy of fayobserver.com. Harrison Barnes (pictured above) took yesterday's loss to Kansas hard. It will be a long off-season for the Tar Heel star whether he decides to leave for the NBA or stay in college for another year.

These have all been words used to describe Harrison Barnes in the wake of a second straight season in which the North Carolina Tar Heels have been ousted in the Elite Eight.

Too harsh? I’ll let you decide for yourself. END_OF_DOCUMENT_TOKEN_TO_BE_REPLACED

5.  Canada’s favorite pastime is still going strong as the regular season nears a close.  There are eight or fewer games remaining for every team in the NHL.  And we all remember last year’s insanely unpredictable playoffs that made Game 7’s seem like a given.  Both Boston and Vancouver are once again heavy contenders to hoist Lord Stanley come June, but New York and St. Louis appear to be in pretty good shape in their own right.  My eyes will be focused on a colossal showdown in the nation’s capital on Tuesday. END_OF_DOCUMENT_TOKEN_TO_BE_REPLACED