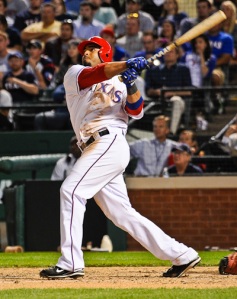 Photo courtesy of insidecorner.dmagazine.com. Texas Rangers slugger Nelson Cruz (pictured above) has played a major role in helping the Rangers return to the World Series for a second consecutive year.

Last week was another great one in the wide world of sports.  We were treated to some outstanding football at both the professional and collegiate ranks, big time playoff baseball, and of course some good old NHL action.  Not to mention the conference realignment that continues to shake up the world in college athletics treks on, while the David Stern/Derek Fisher hissy fit continues.

Here is what you should keep an eye on this week in regards to the sporting world.

5.  The realignment earthquake is in full force at this time and is currently ravaging/altering college athletics as we know it.  Does anyone know what is going to happen next?  No.  Are these changes a good thing?  That remains to be seen.  But I do know that this week will surely provide some more gossip in regards to conference realignment and the future of college athletics.

4.  Most teams have already played four games of hockey thus far.  We are nearly a 20th of the way through the 82 game grind before the playoff madness ensues.  When will Sid “The Kid” return?  Can the Bruins repeat as Stanley Cup Champions?  Will the Canucks finally learn to win the big one?  It is still early, but I for one am very excited for what promises to be a great season.  Plus the hopes of an NBA season appear to be slim to none.  On Tuesday there are 10 different matchups around the globe, while Thursday there are 11.  So in all likelihood your favorite team will be in action on Tuesday or Thursday.

3.  College Football is already headed to the second half of play. LSU and Alabama continue to wow.  Virginia shocked the world in knocking off a red-hot Georgia Tech team.  Wisconsin is absolutely obliterating any and all challengers averaging an astonishing 50 points a game. And South Carolina lost the second member of their “Big Three” this weekend, when Marcus Lattimore went down with the knee injury felt across the entire state of South Carolina (I wish him the best of luck in his recovery).

-USC at Notre Dame (When isn’t this a big time game?)

2.  Tom Brady saved the day for a change against Dallas, while the Jim Harbaugh magic carpet ride continued in the Motor City against the formerly undefeated Lions.  In addition, the Cincinnati Bengals are now 4 and 2 (yes that is correct) and even the “Dream Team” was able to win a game. Week 6 of NFL Football is nearly complete, but Week 7 is right around the corner.

1.  As if this was a real mystery.  The MLB Playoffs are still going on folks.  And thus far, they have been absolutely wild.  Nobody could have possibly guessed that  the Yankees and Phillies would go down swinging in the division series.  Or that the Rangers would find themselves back in the Fall Classic.  Lastly, who really saw Tony Larussa and the Cardinals representing the National League in the Fall Classic?  This may in all honesty be a bigger surprise than both the Yankees and Phillies going down.  Either way, the MLB playoffs have not disappointed by any means.  And you better believe that this World Series is going to be electric.

-The clock strikes midnight on the Cardinals Cinderella run.  Texas has too strong of a starting rotation and can hit the ball all over the park in a similar fashion to St. Louis.  Guys like Nelson Cruz, Josh Hamilton, and Mike Napoli have been red hot at the plate.  The Rangers are the more well-rounded team and it will show over the course of a best of seven series.  Kudos to the Cardinals on a remarkable run and all but ensuring that the Machine will return to St. Louis next year.