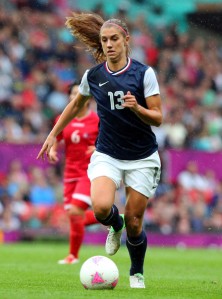 Photo courtesy of zimbio.com. Alex Morgan (pictured above) saved the day sending the United States to the gold medal game and breaking the hearts of Canada.

Continuing in the same form as the string of heart-stopping games from last summer’s women’s World Cup, the U.S. defeated Canada 4-3 in extra time in an instant classic at Old Trafford to advance to face Japan in the gold medal game.

Perhaps this was the only fitting conclusion to a game where in order for the top-ranked U.S. to avenge a heartbreaking loss on penalty kicks to Japan in last summer’s World Cup final, the Americans had to deliver a heartbreaking loss to Canada, ahead three times in this game, only to squander the lead three times in this game before finally succumbing to an Alex Morgan header in the 123rd minute, seconds removed from penalty kicks.

Morgan’s goal was eerily reminiscent of the late goal Abby Wambach scored versus Brazil in the quarterfinals of the last World Cup to send that game to penalty kicks, where the Americans ultimately prevailed.

Unlike the game that the Brazilians lost in the World Cup, the contrast between victory and defeat in the matchup between neighboring countries was seen in mere seconds, skipping the drama of penalty kicks altogether. As the final whistle blew, the Americans reveled in euphoria, whereas the tough luck Canucks collapsed to the field, many of them sobbing.

For the Canadians, the loss was a culmination of frustrating moments across the 120 minutes rather than just a snapshot of sadness framed by a fortuitously timed Morgan winner.

Notably, the Americans got the benefit of a rarely called six-second call with the Canadians ahead 3-2 with about 10 minutes to play in regular time. Canadian goalkeeper Erin McLeod held onto the ball too long, resulting in an indirect free kick inside the penalty box.

The following indirect free kick struck Canadian defender Marie-Eve Nault on the elbow, and Wambach stepped up to the penalty spot, tying the game and giving the Americans yet another chance at victory, and leading Canada to believe it had been robbed.

Arguably, Canada shouldn’t have been in such a position after Canadian captain Christine Sinclair put together one of, if not, the best game of her career.

American goalkeeper Hope Solo, largely untested against lesser competition, was shocked three times by the goal-scoring prowess Sinclair, who is the only international player to have scored against Solo more than twice in her career—let alone more than twice in a single game.

Despite the stellar individual performance, Sinclair said after the game that she would have traded her hat trick for a victory, what would have been the first for the Canadians over their southern rivals since 2001.

From one Canadian to another, Christine, I feel your pain.

It takes a crushing loss to pave the way for a special victory in sports, as was the case Monday evening in England.

Whether or not the Americans will ultimately capitalize on this epic victory by defeating the Japanese at Wembley Stadium is up to them. To come this far and lose to the same opponent, would no doubt be as sobering as the Canadians’ loss.

The gold medal game between the United States and Japan will be televised live at 2:45 p.m. (Eastern Time) on the NBC Sports Network.