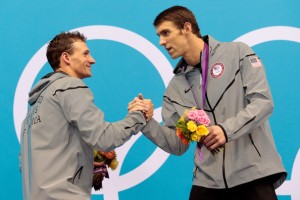 There is no ifs, ands, or buts about it. Michael Phelps owns Ryan Lochte.  Even though 2012 was supposed to be Ryan Lochte’s “time,” it surely hasn’t been (at least since last Saturday’s 400 IM).  Yesterday, this fact was confirmed when Phelps defeated his “rival” in the 200 IM, becoming the first male swimmer to win the same individual event at three consecutive Olympics.  Michael Phelps has left no doubt in anyone’s mind that he is the greatest Olympian of all time.  Anybody who had any doubts or questions heading into London, likely has dismissed those thoughts.

Things in London started out so bleak for Phelps with a very disappointing fourth place finish in the grueling 400 IM.  Phelps appeared ill-prepared and disinterested.  Since then, the “GOAT” of Olympic swimming has added to his medal collection with two golds and two silvers.  Phelps has 20 overall medals, the most ever for an Olympic athlete (two events left to go in London).  The US male athlete with the second most medals:  Ryan Lochte (11).  Amazingly enough, since 2004, Phelps and Lochte have combined for 31 medals (likely have more on the way).  This combined total since 2004 would rank them in the top 20 as a country for overall medals since Athens (2004 Olympics). END_OF_DOCUMENT_TOKEN_TO_BE_REPLACED

The Word:  What transpired on January 8, 2012 left a bitter taste in the mouths of Steeler Nation.  Tim Tebow may be gone, but Peyton Manning has arrived. END_OF_DOCUMENT_TOKEN_TO_BE_REPLACED