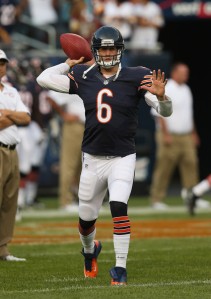 Photo courtesy of zimbio.com. Are Jay Cutler (pictured above) and the Chicago Bears poised for a big year in 2012? Our very own Wesley Kaminsky thinks so.

The NFL off-season always seems too long, doesn’t it? In an off-season dominated by Tim Tebow and the New York Jets, it’s that other team in New York who are the reigning Super Bowl champions. They shocked the NFL world a season ago, getting hot at the right time, beating the likes of the Packers, 49ers, and then eventually the Patriots. That takes guts.

With teams such as the Packers, 49ers, Bears, Saints, and Falcons, just to name a few, the NFC is becoming a powerhouse. I didn’t even touch on the NFC East.

In the AFC, the Patriots look like the clear-cut team to beat, as they added more weapons to an already lethal offense and revamped their defense.

Can the Ravens finally get over the hump? Will Peyton Manning return with a vengeance?

These questions will be answered in due time. END_OF_DOCUMENT_TOKEN_TO_BE_REPLACED