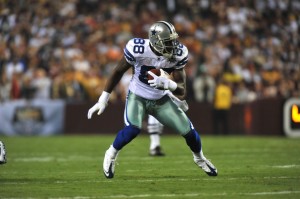 Photo courtesy of zimbio.com. It appeared all over in Dallas after Dez Bryant (pictured above) scored on a 50-yard strike midway through the 4th. Sadly for the Cowboys, the lead did not hold up and it is a whole new ballgame in the NFC East now.

On 2nd and 11, with 5 minutes and 52 seconds left, the Cowboys led the Giants 27-22. Then, Tony Romo connected with a wide open Dez Bryant for a 50 yard touchdown, as the Cowboys took a 34-22 lead with 5:41 left. The Cowboys were about to end the Giants season and take control of the NFC East.

Eli Manning had something to say about that though. Manning orchestrated two beautiful drives as the Giants did the improbable, and won in Dallas 37-34, on a Jason Pierre-Paul blocked field goal. Now, it’s the Giants division to lose, and it might just come down to Week 17 when they meet again, at the Meadowlands.

That wasn’t the only thrilling finish in Week 14 though. T.J. Yates, in just his second career start, threw the game winning touchdown pass to Kevin Walter with two seconds left to lead the Texans to the franchises first playoff berth.

And then of course, there were the Broncos, who overcame a 10-0 deficit with 4:34 seconds remaining. The Bears are just another team on what is becoming a long list, who have been “Tebowed,” which has become the most popular expression of the 2011 NFL season. It’s amazing how much this Broncos team believes in Tim Tebow and I can’t say enough about it. The guy is just a winner.

4. Pittsburgh Steelers (6, won 14-3): 10-3. Even with a high ankle sprain, Ben Roethlisberger finished the game against the Browns. I’m not sure what it takes for him to miss a game. (Next game: at SF on MNF)

5. New England Patriots (3, won 34-27): 10-3. It’s hard to believe the Patriots could get to the Super Bowl with their current secondary.  Wouldn’t you like to see an Aaron Rodgers vs. Tom Brady Super Bowl though? (Next game: at Denver)

6. Houston Texans (7, won 20-19): 10-3. With that comeback win, the Texans have now won seven straight games and clinched a playoff berth for the first time in franchise history. T.J. Yates has been a pleasant surprise. (Next game: vs. Carolina)

8. Denver Broncos (9, won 13-10): 8-5. At this point in the season, you expect Tim Tebow and the Broncos to find a way to win every week. Sunday against the Bears was simply spectacular; a miracle. (Next game: vs. New England)

16. Tennessee Titans (17, lost 22-17): 7-6. Jake Locker made a rookie mistake on that last play against the Saints, but he was impressive throughout the game. Their season is on the line in Indianapolis. (Next game: at Indianapolis)

21. Philadelphia Eagles (25, won 26-10): 5-8. Funny how analysts are still talking about the Eagles playoff chances. In the words of Jim Mora, “Playoffs? Are you kidding me?” It isn’t happening. (Next game: vs NYJ)

23. Carolina Panthers (23, lost 31-23): 4-9. The Panthers priority for the rest of the season should just be to finish games off. They should have way more wins than four. (Next game: at Houston)