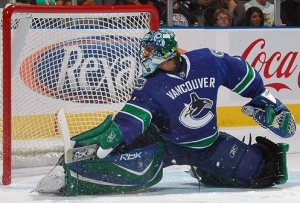 The home cooking in the Stanley Cup finals continues to be one of, if not the most, decisive factor in the quest for the Cup.

There’s really no other reason to explain the discrepancies between both teams (Boston goalie Tim Thomas is still an exception to the rule affecting all the other players on the ice) when playing on home versus on the road.

The post game 4 blog post on TheSportsKraze (why don’t you go back and read it now before you get too excited by this post) pointed to the splits of Vancouver goalie Roberto Luongo, who has been hemorrhaging vulcanized rubber into his net while away from home.

However, with the Canucks back in the friendly confines of Rogers Arena, the goal smorgasbord the Bruins enjoyed in Massachusetts quickly ended as Luongo bounced back from pitiful performances in Boston to post his second shutout of the Stanley Cup finals (both at home).

Much like in game 1, when it was unlikely hero Raffi Torres notching the only goal of the game, tough guy Maxim Lapierre was the only Canuck to light the lamp despite a roster chalk full of skill and panache.

Once again, it was a shame for Thomas, the one player to exemplify consistency throughout the series to let in a questionable goal and mar an otherwise flawless performance.

The only thing more consistent than Thomas and his occasional flub, has been the home team winning in this series. Funny how teams can play so differently when they know people are waving towels out of love.

Turning point: Lapierre’s goal gave the Canucks all they needed to hold on for the always important game 5 win. In the second period, commentators Mike “Doc” Emrick and Eddie Olcyzk remarked that a single goal was probably all that was needed.

Turns out, they were right.

Three Stars of the game:

Note: Picking these three stars is about as easy it gets in terms of figuring out the notable performances.

Black & Decker Tool of the game: Luongo. “But Nick!” you’re exclaiming, “How can you be the first star and a total toolbag?” First, stop yelling. Second, let me explain.

Luongo is undoubtedly a talented goalie and Friday night he showed he was fully capable of showing up with a clutch performance. However, the greatest goalies in NHL history (like Patrick Roy and Martin Brodeur) never needed multiple opportunities to finally shine on a big stage. Brodeur and Roy seized the moment and did the job right the first time. If the Canucks win the Stanley Cup, Luongo will deserve some of the credit, but he certainly will not have willed his team to victory, driving his team to a Cup triumph. Instead, Luongo will have backed his way into having his name engraved on the Cup with a string of hot and cold performances, bailed out by the players in front of him more often than not.

Other nuts and bolts: In the 2003 Stanley Cup finals between the New Jersey Devils and the Anaheim Mighty Ducks (yes, they were still “Mighty” at that time) the home team won every game of the series. At this point, it’s hard to imagine the Bruins not leveling the series when the teams travel back to Boston for game 6.

Then, assuming Boston wins, the series will conclude in Vancouver and, well, you know what they say about history repeating itself.