Looking ahead to NBA free agency (if and when it happens) 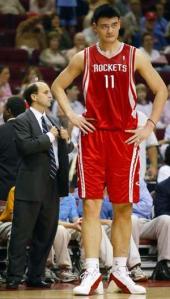 Photo courtesy of watchesbydesign.com. Yao Ming (pictured above) could be a potential bargain pick up for a contender when the CBA situation is eventually figured out according to our very own Nick Craddock.

With a Thursday midnight deadline looming, NBA owners and the NBA players union appear nowhere near close to hammering out a new collective bargaining agreement that would allow for free agents to start negotiations, as regularly scheduled, on July 1.

However, whenever the 2011 free agency period does commence, there will be some talented ballers available for general managers to sign. How a new CBA affects player contracts is yet to be seen, but here is a list of this summer’s free agents who are overvalued and in line to start taking baths of Benjamins. On the other hand, potential bargain players could reap huge rewards for teams:

1. Jose Juan Barea (Dallas Mavericks): The diminutive Puerto Rican point guard won many admirers for his performances during the Mavericks’ 2011 championship run, but whether or not this former undrafted player and star from Northeastern is ready for primetime is yet to be seen. Sure, Barea sliced-and-diced the Lakers during the playoffs, but could this career bench player sustain such success for 82 games a year in a more demanding role? Regardless of my skepticism, his playoff heroics will be the most recent memory general managers have of Barea and, consequently, he will undoubtedly cash in with a hefty pay raise. Once Barea receives a bump in pay, one can only hope he will follow the path of fellow Puerto Rican Jennifer Lopez; although he used to have a little, but then a lot, he’ll remember where he came from because he’s J.J. from the block.      END_OF_DOCUMENT_TOKEN_TO_BE_REPLACED