From Pretender to Contender, and Vice Versa 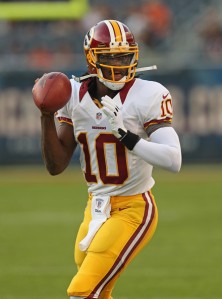 Photo courtesy of zimbio.com. Could Robert Griffin III (pictured above) help transform the Redskins from a pretender into a contender? Our very own Jeremy Powers thinks so.

The football season is upon us. Put a smile on your face.

Tonight, the Giants travel to the Jerry Jones Dome to revive the rivalry that received plenty of media attention as is typically the case this offseason.

Last season, Tampa Bay stepped back from a ten-win season in 2010 to a 4-12 record and a last place finish in the NFC South. Ouch, talk about the opposite side of the spectrum. The Bucs were a pretender last season.

Cincinnati, who won four games in 2010—reached the playoffs with rookies leading the way on offense. Andy Dalton and A.J. Green made a formidable duo and the Bengals defense was stout all season long leading the team to a 9-7 record. The Bengals were a contender last season.

This season I expect some of the same parity that we see every season in the NFL. I see a few teams emerging as playoff contenders and some teams falling straight into the depths of their respective divisions.

The Washington Redskins were 5-11 last season. Drafting Robert Griffin III is a huge upgrade at quarterback over Rex Grossman and John Beck that will result in two more wins minimum. Not to mention the addition of Pierre Garcon as a big-play threat. Washington’s defense is quite impressive on paper as well. Playing in a 3-4 base defense, the Redskins linebackers will lead them as veteran London Fletcher powers a group that also starts second-year guy Ryan Kerrigan, and All-Pro Brian Orakpo. I think the Redskins get to 8-8 this season, which puts them in the hunt for a wild card spot. END_OF_DOCUMENT_TOKEN_TO_BE_REPLACED