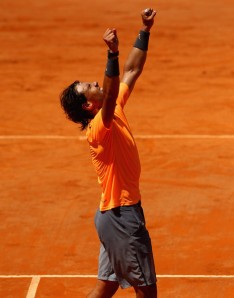 Photo courtesy of zimbio.com. Rafael Nadal (pictured above) is looking to make history in Roland Garros with a seventh French Open title.

Paris.  Roland Garros.  Philippe Chatrier.  It is time for the year’s second Grand Slam.  Though this is not typically a favorite tournament for Americans (last Men’s winner was Andre Agassi in 1999, Women’s winner was Serena Williams in 2002), people love parity in sports.  This is the closest thing that the tennis world has to March Madness.  Before Rafael Nadal came along as the “Clay Court King,” the French Open had nine different men’s champions in a ten-year period.  Despite Rafa’s dominance, this tournament is always scintillating as the clay court specialist come out in full force and enjoy their time in the sun. On the Women’s side, there have been four different winners the past four years.  Strap in, and get ready for a little taste of Paris.

How could you pick against this guy in Paris?  He is the “Clay-Court King” for a reason.  This will be the year that the one they call “Rafa” surpasses Bjorn Borg as the greatest clay court player of all time with his seventh title at Roland Garros.  Coming off of a huge victory against Novak Djokovic in Rome, not even the world number one holds a mental edge on the star from Majorca.  If I were Bjorn Borg, I would give Djokovic and Federer some serious advice on how to thwart Nadal on the clay. END_OF_DOCUMENT_TOKEN_TO_BE_REPLACED