All he did was win 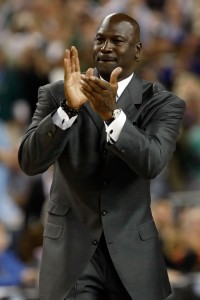 Photo courtesy of zimbio.com. In a jersey, all Michael Jordan (pictured above) could do was win. In a suit, all he has been doing lately is lose.

Once upon a time Michael Jordan and the word “winning” were synonymous.  Everyone wanted to be like Mike.  There truly was not a more well-known athlete.  Since the turn of the century, times have really changed for “His Airness.”  The post playing career has not exactly been one of triumphs and successes for the man commonly referred to as the GOAT (Greatest of All Time).

Jordan, the current majority owner of the Charlotte Bobcats took another loss last evening.  After posting the worst record in terms of NBA history in terms of winning percentage, the Bobcats got the shaft in the 2012 NBA draft lottery.  They will not get to build their team around can’t miss prospect, Anthony Davis.  Instead, they will be saddled with pick number two.  Though there are plenty of talented players that will be drafted on June 28th, none even rival the potential possessed by the one with the infamous unibrow.  Ironically, the team with the NBA’s worst record has not won the draft lottery since back in 2004 when the Magic earned the right to draft Dwight Howard.  That marriage continues to get sweeter and sweeter (just kidding).

The Bobcats really could have used the former UK prodigy.  Any team that goes 7 and 59 obviously has a wide variety of holes, but Davis appears to be one of those franchise type players.  Michael Jordan without question had a better playing career than Larry Bird.  The same cannot be said in terms of post-playing career though.  Bird is currently dominating Michael Jordan in terms of front office prowess. END_OF_DOCUMENT_TOKEN_TO_BE_REPLACED