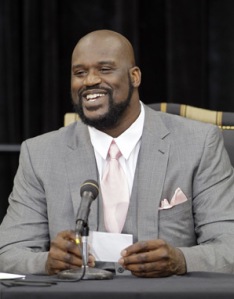 Photo courtesy of youvalley.com. Shaquille O'Neal (pictured above) is already making his voice heard from the broadcast booth as expected.

Shaquille O’Neal may have retired, but he’s still making headlines off the court. In a TV gig as an NBA analyst for Turner Sports, Shaq gave viewers their daily dose of scrutiny directed at the oft-vilified Miami Heat.

Chris Bosh, considered by many to be the weakest (and, on occasion, weeping) link of the Miami’s “Big Three,” found himself in O’Neal’s crosshairs; Shaq Fu questioned whether Miami had a “Big Three,” but instead only a “Big Two” — LeBron James and Dwayne Wade.

Evidently, this was a gibe at Bosh, and, well, I’m siding with the Diesel in this debate.

On paper, Bosh and his six all-star appearances, significant annual salary and seamless ability to record a double-double in any given game gives the impression that he is, in fact, just like any other of the elite power forwards in the NBA today.

In some ways, he fits the description of an elite player, but in one very important way, Bosh fails to earn the elite status given to Wade and James.

Bosh’s Heat counterparts, love ‘em or hate ‘em, made winning a staple of their basketball repertoires long before they united their talents in South Beach.

Wade won a championship in 2006 (thanks in part to teaming with the Big Shaqtus before injuries started to severely diminish his production), and James turned the Cleveland Cavaliers from a cellar dweller to a contending team year-in and year-out. Recall that a year after Wade’s championship, James almost single-handedly brought a championship to Cleveland in 2007, leading the Cavs past the Pistons and into the NBA Finals before being eliminated.

Meanwhile, North of the Border, Bosh was struggling to embrace the role of franchise player for the Toronto Raptors.

Granted, the Raptors’ front office didn’t necessarily surround Bosh with the best talent in his seven-season stint in Toronto; however, one division title (before the Celtics and Knicks retooled their respective rosters) and two first-round playoff exits isn’t the kind of resume one would expect from a franchise player.

That kind of performance in the NBA is more likely to come from a team with a mish-mash of moving parts destined to barely make the playoffs. Suffice to say, the Raptors were undoubtedly helped in their quest to make the playoffs those two seasons because they play in the Eastern Conference, which for the better part of the last decade has been considerably weaker than the Western Conference and thus, easier to qualify for the postseason.

But, even when Bosh was teamed with quality players, as he was at the 2008 Beijing Olympics, Bosh’s performance didn’t outdo the rest on the gold medal-winning team, which included Wade and James.

The role Bosh played on that “Redeem Team” in China is akin to the complementary role he is expected (or, at least, best suited) to fulfill for the Heat. Bosh is a great player, but he lacks the ability, and arguably the bravado, to carry a team.

Unfair (or fair, if you’d like to continue the Heat hatefest well into the offseason) as it may be, the mega-egos Bosh decided to join are as big as the NBA has to offer and they will most likely continue to overshadow his persona for the duration of his contract in Miami.

So, Bosh shouldn’t be too offended by the Big Daddy’s critical words. After all, he’s accustomed to being overshadowed by bigger personalities, but doing a serviceable job while he goes largely unnoticed.

(Note: I failed to work in a few of the many nicknames bestowed upon O’Neal during his career in this post, such as: “Wilt Chamberneezy,” “Superman,” “The Big Baryshnikov,” “The Real Deal” and “Dr. Shaq” among others. You know, I didn’t want my use of them to feel forced or too Shaqtastic).

2 responses to “Shaq puts the KiBosh on Miami big man”