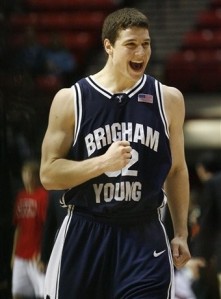 I expect the clock to strike Midnight tomorrow night for the Jimmer Show.

The madness resumes tomorrow evening with 4 big time games.  And it cannot come soon enough.  Out of the 8 teams that play tomorrow, I correctly picked 6 of them in my bracket.  Plus all 4 of the teams I predicted to move on to the Elite Eight in my bracket are still in tact.  Here is a closer look into each of tomorrow’s matchups.

Connecticut vs San Diego State:  Can you say Kemba?  UConn has won 7 straight and are a perfect 10 and 0 in tournament play on the year heading into tomorrow’s showdown with a very talented and higher seeded San Diego Aztecs team.  Now I realize that most of the national media has been grilling the Big East.  I mean who wouldn’t.  The conference began the tourney with 11 teams and only 2 still remain as we begin the Sweet 16.  Let me state though, both of the teams still standing went 9 and 9 in conference play.  Name me another team that is still standing in this bracket that went 500 in conference play.  I will do one even better.  Name me a team that did not finish in the top 4 of their conference that is still alive.  But back to the topic at hand.  San Diego State is also on a hot streak of their own having won 7 consecutive games.  43, 25, and 30 sums it up for me though when looking at this matchup  (Jimmer’s point totals vs SDSU this year). Though the Aztecs play very solid defense and also have a very well rounded scoring attack, they have failed to slow down teams with elite scorers all year.  Good luck slowing down Kemba.  At least one Big East team will find their way into the Elite Eight.  And it will be the UConn Huskies as they gut out 3 point victory behind the Kemba Show.

BYU vs Florida:  On paper, this game appears to favor the Cougars.  They put up over 80 points a game.  They have the edge on the boards.  And I could go on.  But not so fast.  BYU has not been the same since the dismissal of starting center Brandon Davies for breaking University rules.  Well this will be the first NCAA Tournament game where this vacancy in the paint really hurts.  It will also be the first game in the tournament where BYU plays a team seeded higher than 11th.  The Gators are very deep and talented, and will be the loan SEC team to nab a spot in the Elite Eight.  The Jimmer Show has to end at some point.  Plus Bobby Knight laid out how you stop Jimmer on Sportscenter.  You better believe that Florida Coach Billy Donovan took notes on what the legend said.  I am going to stick with my original pick in this one as well. Gators by 2 in a thriller.

Arizona vs Duke:  The Cats out of the bag literally.  Arizona Wildcats basketball is back, and appears here to stay.  Sean Miller has done a wonderful job with this team and I am still kicking myself for not picking them to beat a young Texas team in the Round of 32.  The Wildcats have won 6 of their last 7, only losing an OT heartbreaker to Isiah Thomas and the Washington Huskies in a PAC 10 Title Game for the ages.  Arizona’s last 3 games have all been decided by 2 points.  Living on the edge can be tough, especially in this magical tournament where anything can happen.  Though I fully expect Sophomore Forward Derrick Williams to have a field day in the paint, it won’t be enough as the Blue Devils catch fire from the perimeter.  Had Duke ran away with the last game against Michigan, I would have given Arizona more of a shot.  But you better believe the Wolverine nail biter served as a wake up call for a very talented Duke team.  Arizona could pull the upset on another day, but I do not see it happening Thursday as Duke goes wild from beyond the arc.  Duke will win their 6th straight and set up the Regional Final matchup America has been waiting for.  Duke vs Connecticut.  Nolan Smith vs Kemba Walker.  Get excited for a dream matchup rivaling that of the 92 Duke/UK Regional Final on paper.

Butler vs Wisconsin:  I will admit that I did not have Butler making it this far (again).  I had them losing in the first round this year just as I did last year.  You would think I would learn to stop picking against Brad Stevens, and his very solid Bulldog’s squad.  Think again.  I am going with my Final Four Pick out of the wacky Southeast Region, Wisconsin, to end the Cinderella Butler story this year in the Sweet 16.  Butler is a very good team, who is on a hot streak, having won 11 straight games.  But lady luck has to run out some time.  And they really played with fire in escaping against both Old Dominion and Pittsburgh.  In this matchup of two of the best coached and typically most disciplined (outside of Mack’s late foul) teams in America, I am going with Bo Ryan and the old school Wisconsin Badgers to gut out a wild 1 point victory.  The Badgers will be playing for a trip to Houston come Saturday.

So there you have my picks.  I am sticking with all 4 original winners from my bracket.  All 4 of these games should be exciting.  The Madness continues into Week 2..