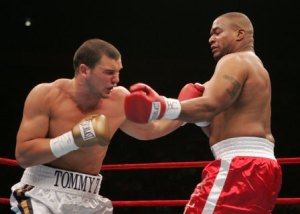 Cincinnati Bengal's wide receiver has talked trash to Raven's Safety Tom Zbikowski (pictured above, left) via Twitter about a possible boxing match between the two NFL players. Does Chad Ochocino really want to get in the ring with that guy?

It is another Tuesday.  Which means it is time for some “Food for Thought.”  These are the topics in sports that have really caught my attention in the past 24 hours.  Items that must be discussed.  So let’s jump right into it.

Last night, the team with the best record in the NBA took a major hit.  So what if they won the game.  They lost the battle.   The 2 time MVP (yes as many as Lebron) Tim Duncan went down with an ankle sprain during last night’s game against Golden State.  Now I realize that Duncan is now only the 3rd leading scorer on the Spurs.  San Antonio has become the Ginobli/Parker show.  And both of these guys are great players.  But come playoff time, a post presence is so crucial in games that generally come down to a final possession or two.  Not to mention that Duncan is one of only 2 guys on the team that averages 7 or more boards a game (DeJaun Blair averages 7.1).  Luckily for San Antonio, they can do without Tim for the rest of the regular season and not sweat it by any means.  They are currently 7 games ahead of LA with 12 games remaining.  Plus they are an astonishing 33 and 3 at home.  That one seed could go a long way towards getting the Spurs back to the NBA Finals.

Popovich was very short in his answers regarding what the future holds for Duncan.  Gregg is a great coach who understands the importance of having the rock of the franchise at full strength come playoff time.  They may not need Duncan to survive Round 1, but come Round 2, you better believe that the former twin tower will be essential to San Antonio success and bid for their first title since 2007.

So the NFL is not currently on for next season.  The owners are still having meetings, making rule changes, and preparing as if there will be games come September.  This is a good sign in my eyes.  Regardless if it does not involve owner/player interaction.  But one item that has been getting a lot of attention is what the NFL players are currently doing to remain active or employed for that matter.

Most of the guys are working out hard and training as if there will be games come September.  Others are dealing with hissy fits on their prospects for next season and who they will play for.  But then there are some attention hounds like Chad Ochocinco, who are having “for fun” soccer tryouts.  Talk about the cardinal sin for an NFL football player.  Going to play soccer.   If you are not a kicker, this is definitely not going to help your street credibility or toughness factor in the locker room with the rest of the League. But there is one man, who has become even tougher this off-season.  Former Notre Dame Star, and current Baltimore Raven’s Safety, Tom Zbikowski.  Zibby, as he is commonly called, has picked back up with his professional boxing career and appears to not be joking around.

Back in June of 2006, Tom made his professional boxing debut with a first round knockout of Robert Bell at Madison Square Garden.  Nearly 5 years later, he still has it.  Earlier this month he defeated Richard Bryant in the first round and now is currently getting ready for a fight in Atlantic City on Saturday Night.  And to prove how serious he really is about this profession, he has hired on legendary trainer Emanuel Steward to help whip him into shape.  Fighters that are trained by Steward tend to mean business.  Steward is a Hall of Famer for crying out loud.

Earlier this month, Chad Ochocinco engaged in a war of words via Twitter  with Zbikowski about a possible boxing match.  If I was Chad, I would stick to soccer, or keep his mouth shut around Zbikowski.  This guy would knock him into tomorrow inside of 30 seconds.

But I will tell you this much, I think College Football missed out on the memo.  How many arrests or punishments can be doled out in this month?  First off you have the whole Jim Tressel fiasco.  Bad news bears that will probably continue to get worst.  Then you got a slew of run ins with the law from marquee players.  Notre Dame star receiver Michael Floyd picks up a DUI.  Star Gators cornerback Janoris Jenkins gets cited on a marijuana possession charge.  Miami University linebacker Ramon Buchanan is facing multiple felony counts.  And these are just some of the issues that have been in the national headlines.  You know as well I, many occurrences go on locally that never reach the national media stage.

Can somebody intensify Spring practices so they are too tired to do anything but rest after?  Something needs to be done to dissuade some of the off field shenanigans and fast.