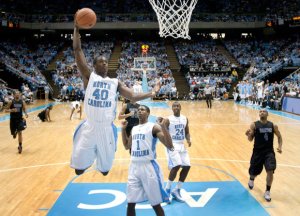 North Carolina super freshman Harrison Barnes (pictured above) continues to improve his draft stock as UNC will creep one step closer to the Final Four tonight.

As if last night’s games weren’t wild enough.  We get another full dosage this evening with 4 big time matchups.  The winners tonight will find themselves one game away from dancing to Houston.  A trip to the Final Four.  College Basketball’s ultimate dream.

Marquette vs North Carolina:  Make sure you bring your pacemaker for this one.  Two teams that really like to get up and down will go to battle tonight out of the East Region.  The Golden Eagles have been a bit unpredictable the last couple of weeks.  They lost their final two regular season games to Cincinnati and Seton Hall.  Then they went into the Big East Tournament, realizing that they had work to do to get a bid, and took care of business against Providence and West Virginia.  A day after the huge win against West Virginia, they got absolutely stomped by Louisville.  They had done just enough to make the tournament and have taken advantage of their opportunity to the fullest.  Butler and Johnson-Odom are a scary tandem at times.  Sadly for Marquette, they are playing a team that not only can get up and down with them, but they are deeper and more talented.  Though it is has been a wonderful run for the Golden Eagles, UNC will be too deep in the end as they send a 10th Big East team home packing.

Richmond vs Kansas:  Many have picked Kansas to win the National Championship.  Many believe that the Jayhawks are the deepest and most talented team in the country.  My theory is that they are very good, but not quite as good as last year.  Last year’s team lost in the 2nd round.  And though this team has already passed Round 2, I do not expect them to bring home the title (I expect them to finish 2nd).  The Spiders are not exactly a pushover though.  Winners of 9 straight games, including victories over Temple and Vanderbilt are quite impressive.  I just feel that Richmond will have no answer inside for the Morris twins, in that Justin Harper is their real inside presence.  2 against one is never good odds.  Plus KU is a team that leads the country in field goal percentage.  Look for Kansas to notch their 11th straight win in a hard-fought game that comes down to the final minute.

Kentucky vs Ohio State:  This is by far the most intriguing matchup of the night in my eyes.  Two extremely talented teams with very high expectations looking to keep the dream alive one more night.  On paper, Ohio State hold the edge in nearly every category.  But I will state, OSU has not played a team as talented as the Wildcats possibly all year.  If OSU continues to stroke it from the perimeter, it will be game over for UK in a hurry.  If the Buckeyes struggle shooting the rock and Sullinger gets into foul trouble, things could get very interesting.  Tonight’s X Factor lies in Mr. Terrence Jones though.  Typically OSU likes to place their savvy veteran David Lighty on their opponent’s talented 4s.  My question, can Lighty handle a talent who possesses the versatility of Terrence Jones?  I fully expect Aaron Kraft to neutralize UK star PG Brandon Knight.  But Jones will be the X factor.  There are too many what ifs though for UK.  They are one year away with next year’s dynamic class coming in the Fall.  OSU wins this one.

Virginia Commonwealth vs Florida State:  Two teams that nobody expected to be here now go toe to toe for a chance to head to the Southwest Regional Finals.  The Rams put up an astounding 94 on Purdue.  Do not expect them to put up half that point total against Florida State’s outstanding defense.  I am not sure how the Rams have made it to this point.  I guess they just have understood the moment and taken advantage of the opportunity that they have been given.  Well tonight, the clock will strike midnight on VCU.  Florida State rides their tenacious D into the Regional Finals with an extremely ugly, low scoring victory tonight.

So there you have my picks.  My picks for the first 3 games have the same winners as on my original bracket.  In regards to Game 4, I did not have VCU or Florida State making it this far originally, but I am going with the Seminoles.