An event that is showering the Cincinnati media realm is the possible signing of Adam “Pacman” Jones.  Will the Bengals actually sign him?  It looks very likely.  And I will be honest.  This is not a bad decision in my eyes..

So Jones has only appeared in 9 games since 2006.  The guy could really play at a time.  You take away his off field antics, which are a big deal, and he is probably a Pro Bowl player on a consistent basis.  You want to know the best part?  He is only 26 after all that he has been through.  Now many are saying, why would we pick up another corner?  We have arguably the best tandem in the League in Leon Hall and Johnathan Joseph.  This is 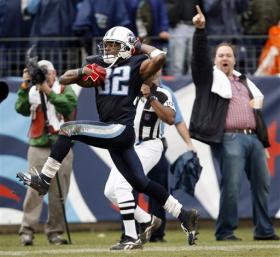 true.  But how was our punt return game last year?  Did guys in our secondary not get hurt last year?  You ever remember going through an NFL season injury free?

Though the Bengals had a great year, their punt return game was abysmal.  We had a man by the name of Quan Cosby returning punts.  And you know what, I think I could go out there and do what he does.  It was fair catch after fair catch.  Or a catch and a 5 yard run.  The man was no threat in any shape, way, or form.  This is a problem.  See the difference a guy like Mardy Gilyard made for our very own UC Bearcats last year?  A threat in the return game can be a major game changer.   Jones could be a perfect threat for us.  In 2 years with the Titans, he took 4 punts back for TD’s.  How many did Quan take back last year?  Well it is a very easy number to count to..0.

So I am hoping the Bengals solidify this deal.  It is a high risk high reward type of proposition due to his off field antics.  The best part though is we can sign him for pretty much the League minimum.  So in no way is this a make or break deal for our overall team salary.

Welcome to the Pacman era in Cincinnati (hopefully).

This entry was posted in NFL. Bookmark the permalink.