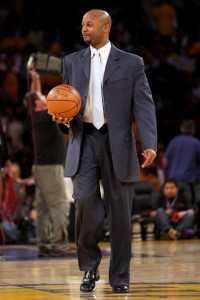 Photo courtesy of zimbio.com. Brian Shaw (pictured above) should be the next head coach of the Charlotte Bobcats. The question is will Rod Higgins and Michael Jordan extend him an offer?

Around this time last year the Los Angeles Lakers were looking for a head basketball coach to succeed the great Phil Jackson.  As you are all well-aware, Mike Brown ended up being the man for the job.  Though Brown did a solid job (according to some), I along with many (including Kobe Bryant) felt another candidate was the man for the job.  Well once again, Brian Shaw is in the running to obtain his first NBA head coaching job.

It is no secret that the Charlotte Bobcats are in need of a lot of things.  After going 7-59 last season and posting the lowest winning percentage in NBA history, there are holes galore.  This is to be expected with a team that posted a winning percentage of .106.  Also, the Bobcats unfortunately will not get to pick the lone guy who appears to be a sure-fire franchise player, Anthony Davis (the New Orleans Hornets will).  And Michael Jordan isn’t coming out of retirement any time soon.

According to most sources, the two finalists to fill the position are Quin Snyder and Brian Shaw. END_OF_DOCUMENT_TOKEN_TO_BE_REPLACED