Photo courtesy of zimbio.com. Brian Shaw (pictured above) should be the next head coach of the Charlotte Bobcats. The question is will Rod Higgins and Michael Jordan extend him an offer?

Around this time last year the Los Angeles Lakers were looking for a head basketball coach to succeed the great Phil Jackson.  As you are all well-aware, Mike Brown ended up being the man for the job.  Though Brown did a solid job (according to some), I along with many (including Kobe Bryant) felt another candidate was the man for the job.  Well once again, Brian Shaw is in the running to obtain his first NBA head coaching job.

It is no secret that the Charlotte Bobcats are in need of a lot of things.  After going 7-59 last season and posting the lowest winning percentage in NBA history, there are holes galore.  This is to be expected with a team that posted a winning percentage of .106.  Also, the Bobcats unfortunately will not get to pick the lone guy who appears to be a sure-fire franchise player, Anthony Davis (the New Orleans Hornets will).  And Michael Jordan isn’t coming out of retirement any time soon.

According to most sources, the two finalists to fill the position are Quin Snyder and Brian Shaw. END_OF_DOCUMENT_TOKEN_TO_BE_REPLACED

To do it all 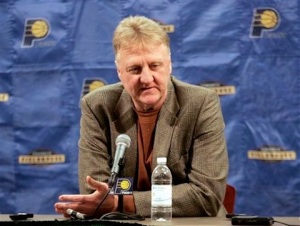 Photo courtesy of inflexwetrust.com. Larry Bird (pictured above) added an NBA Executive of the Year Award to his already impressive resume yesterday. What can’t this legend do when it comes to basketball?

Some people can just do it all.  Larry Bird is one of those people.  Yesterday, Bird added to his already amazingly long list of basketball achievements in taking home the NBA’s Executive of the Year Award.  Bird not only excelled as a player, but he saw  great success as a coach, and now is thriving as Indiana’s President of Basketball Operations.  Bird is the only person in NBA history to be named MVP, Coach of the Year, and Executive of the Year.  I wouldn’t be surprised in the least if Bird would trade the latter two awards for the 1979 NCAA Basketball Championship though.  But I digress.

What Bird has accomplished is absolutely mind-boggling.  Just ask Michael Jordan how difficult it is to transition from a player to an executive.  Jordan’s Charlotte Bobcats set an NBA record for the lowest winning percentage of all time this season.  Sure plenty of former players have turned into great coaches.  Phil Jackson, the “Zen Master,” is one of those guys.  But was Jackson half the player that Bird was? END_OF_DOCUMENT_TOKEN_TO_BE_REPLACED

Go to bat for Woodson

Photo courtesy of zimbio.com. Isn’t it a no-brainer who the Head Coach of the New York Knicks should be in 2012/2013? Mike Woodson (pictured above) is clearly the man for the job.

405 and 563.  3 and 14.  These are the records of the New York Knicks in regular season and postseason play since the departure of Patrick Ewing.  New York has seen better days in terms of basketball to say the least.  After finally breaking their woeful record setting 13 game losing streak in playoff play, New York has many question marks as they prepare for Game 5 of their first round series with the Miami Heat.

Let’s be entirely realistic though.  I have a better shot at winning the lottery than the Knicks do at winning the next three games against the Miami Heat and advancing to the Eastern Conference Semifinals.  Who will be manning the New York sidelines during the 2012/2013 season?  That is the real question.

Unless Phil Jackson miraculously decides to come out of retirement and take over the reigns, Mike Woodson is the man for the job. END_OF_DOCUMENT_TOKEN_TO_BE_REPLACED 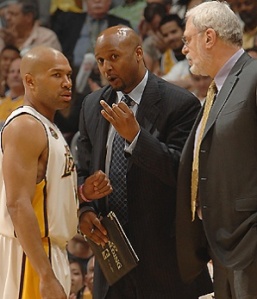 Brian Shaw (Center) appeared to be the man who would get the opportunity to succeed Phil Jackson as the 22nd Head Coach in Laker's history. Sadly for Shaw, he was overlooked for the job.

Have you ever been stood up by a date?  Canceled on at the last-minute? Led on by a girl that you liked? Mistreated by your family or significant other?  If so, which I am assuming most of you have, you know that none of these instances lead to a good feeling.  Well ask Los Angeles Lakers Assistant Coach Brian Shaw about getting led on.  The man just got ditched by the biggest game in town.  One of the NBA’s proudest and most storied franchises, the Los Angeles Lakers. END_OF_DOCUMENT_TOKEN_TO_BE_REPLACED 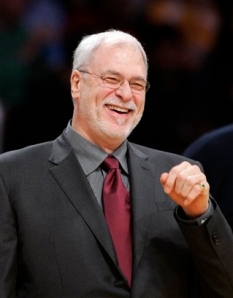 Phil Jackson (pictured above) was not smiling on Sunday. Could Sunday's lopsided loss to Dallas be the last game the 11 time champion ever coaches?

Playoffs, MLB action, playoffs, and more playoffs.  The sporting world has been defined by playoff action the past couple of weeks and will continue to be for another couple of weeks.  Here is a look into the main things that have been on my mind. 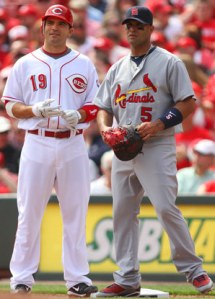 Joey Votto (left) and Albert Pujols (right) will go head to head in Cincinnati as the Reds look to gain ground on the division leading Cardinals this weekend.

It is time to start another week in the wide world of sports.  Last week was amazing, but it is behind us now.  Out with the old and in with the new.

Here are the big events ahead. END_OF_DOCUMENT_TOKEN_TO_BE_REPLACED

“Is This the End of the Laker Dynasty?”

The Kobe and Phil Laker Era appears to be coming to a close. Will it be a happy ending?

The door is almost shut, but it is not entirely closed yet. Anybody who says they saw this coming is full of it.  I realize that Charles Barkley makes his outrageous and obnoxious picks, and makes sure you know it.  But outside of Sir Charles, who I struggle to give credit for predicting this, I do not know anybody who saw this coming.  Things were not supposed to end like this.  This was supposed to be the epic finale to Phil Jackson’s illustrious coaching career.  It was supposed to be Kobe’s time to tie the greatest player of all time with his 6th Championship ring and to start the arguments of whose the greatest.  Everyone knew the LA Dynasty was heading down the home stretch.  But nobody foresaw it ending before June. END_OF_DOCUMENT_TOKEN_TO_BE_REPLACED