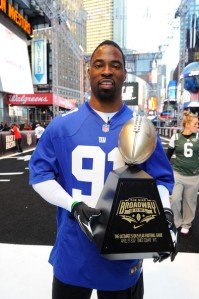 It is no secret that the New York Giants defensive linemen have never been shy with their words.  Guys like Osi Umenyiora and Justin Tuck will always talk a big game.  Generally, they will also back it up too.  For the past decade, the G-Men have always been known to have a great pass rush.  Despite winning their final six games last year and taking home their fourth Super Bowl title in franchise history, the Giants have received hardly any attention from the national media.  Eli is probably wondering where the love is.  Ironically, their crosstown rival has received the majority of the limelight, despite missing out on the playoffs.

Go figure.  There have been two main instances when the Giants have received some national attention.  One instance was when Osi “the chatterbox” Umenyiora spoke in a positive manner about Tim Tebow and a negative manner regarding Robert Griffin III.  Instance number two was yesterday, when Justin Tuck shot back at Green Bay Packers linebacker Clay Matthews for some comments made in a recent Yahoo! Sports interview.

Matthews said, “The fact is, (the Giants) didn’t beat us; we beat ourselves.  We need to play our best ball when it counts. This year, I expect us to be right back where we should be.”

In response, Justin Tuck said, “Thank you for giving us the game, Clay.  I appreciate it a lot.”

Tuck went on to say, “It is football, it is a funny game. Talk is cheap. Play the game. We will see Green Bay again this year so we will see who lays down that week.” END_OF_DOCUMENT_TOKEN_TO_BE_REPLACED

The Word:  What transpired on January 8, 2012 left a bitter taste in the mouths of Steeler Nation.  Tim Tebow may be gone, but Peyton Manning has arrived. END_OF_DOCUMENT_TOKEN_TO_BE_REPLACED

Photo courtesy of zimbio.com. After an injury-riddled 2011, Osi Umenyiora (pictured above) already is stirring the pot in the NFC East with his mouth.

Osi Umenyiora may be only 30-years-old, but he has already left a lasting impact on New York City and the NFL.  Umenyiora during his eight-year stay in New York has already made two Pro Bowls, been named an All-Pro on two different occasions, and won two Super Bowls.  Not to mention he holds the NFL record for forced fumbles in a season (10 in 2010).

He also has had his fair share of issues with Giants upper management, namely Jerry Reese.  After nixing his agent, Umenyiora finally got the contract extension he desired for so long.  Many figured this would enable Osi to be a happy camper for a while.  He may be happy at this time, but his happiness has not stopped him from being a chatterbox. END_OF_DOCUMENT_TOKEN_TO_BE_REPLACED

Playoffs, playoffs, and more playoffs.  It is a great time of year in sports.  And the best part is the playoffs are just starting to really heat up as we enter the later rounds for both the NBA and NHL.  Last week was a blast and the English Premier League’s heart stopping finale was the cherry on top, but this week should be a good one in its own right.  Here are the events to keep an eye on.

5.  Despite a good few months until the NFL season officially kicks off, the trash talking and storylines are just as juicy as ever.  Chad Ochocino has warned Goodell at the possible storm that seems inevitable in the wake of Junior Seau’s death and the heavy emphasis on head trauma.  In addition, two familiar NFC East foes were jabbering during yesterday’s holiday.  Osi Umenyiora wished LeSean McCoy, a “Happy Mother’s Day.”  Lastly, the Vince Young train has landed in Buffalo.  Talk about a major bust.  It may only be May, but the excitement is mounting.  Who else is excited for some NFL football?

4.  Madrid was full of surprises over the course of the past week.  In the end though, two familiar faces came out victorious (Roger Federer and Serena Williams).  Many of the top players were none too pleased with the blue clay.  Maybe this displeasure correlates to the frustration that opponents feel when they travel to Idaho to take on Boise State in football ?  Either way, the French Open is nearly upon us.  Next stop Rome though for what is always a great event. END_OF_DOCUMENT_TOKEN_TO_BE_REPLACED