Photo courtesy of LehighValleyLive.com. Roger Goodell (pictured on the right) and the owners appear to have regained the upper hand on the NFLPA led by DeMaurice Smith (pictured on the left).

Well in sports, all fans have their opinion of good guys and bad guys.  Your hometown team or the team you cheer on are always the good guys while their opponents are always the bad guys.  Even when you watch games that the teams you are a fan of are not even participating in, you choose sides generally.  Whether it be a rival of your team or you have a wager on the contest, generally you develop an opinion and take sides regarding the ball game. END_OF_DOCUMENT_TOKEN_TO_BE_REPLACED 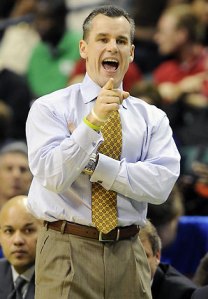 I am not sure how Florida Coach Billy Donovan (pictured above) and the Gators received a number 2 seed. But you can count on the Southeast Region to be a wild one.

It is an extreme chore not to focus all of my attention on the NCAA Tournament.  And I will admit, the majority of my thought over the past 24 hours has been focused on the Madness.  How should I fill out my bracket?  Will it be an upset city marathon like last year?  Or will all the parity hype just be for not?  Well there is one thing I do know.  The Southeast Region will by far be the most unpredictable.  Since viewing the Selection Show on Sunday, I was utterly shocked at the way this region came out. END_OF_DOCUMENT_TOKEN_TO_BE_REPLACED