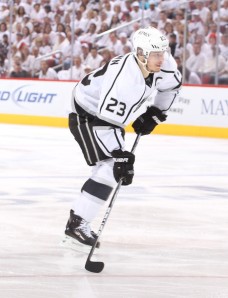 Photo courtesy of zimbio.com. Dustin Brown (pictured above) is a major favorite to bring home the Conn Smythe Trophy.

The 2012 NHL playoffs are coming to a crescendo.  Between a closely contested Eastern Conference Finals featuring the rival New York Rangers and New Jersey Devils and what has turned into a one-sided Western Conference Finals featuring the Los Angeles Kings and Phoenix Coyotes, the muddled playoff picture which began with 16 teams vying for Lord Stanley’s Cup is coming into focus.

Of all the players who have made their mark this postseason in helping their teams to this stage, these five look poised to have the best shot at capturing the Conn Smythe Trophy, awarded to the NHL playoffs’ Most Valuable Player.

1. Dustin Brown, right wing, Kings: Brown is proving why he wears the “C” on his jersey this spring. He leads his team in scoring with seven goals and eight assists, including three game-winning goals. He’s tied with teammate Anze Kopitar for the best plus/minus rating of any player in the playoffs. He delivers crushing hits. And even when he’s not making an incredible play, he influences the game to such a degree that it affects his opponent’s psyche (i.e.Phoenix’s Martin Hanzal cross-checking Brown from behind into the boards during Game 2, resulting in a one-game suspension).  All in all, Brown’s outstanding play makes it unfathomable to think the Kings contemplated trading Brown at the trading deadline. Simply put, the Kings’ stellar play through these playoffs thus far would not be possible without Brown. That description sounds like the embodiment of a Conn Smythe winner. END_OF_DOCUMENT_TOKEN_TO_BE_REPLACED

Photo courtesy of zimbio.com. Tom Brady (pictued above) has not won a playoff game in four years. Can he regain his postseason swagger against Tim Tebow and the Denver Broncos?

The 2012 NFL playoffs are among us, and during Wild-Card Weekend, things started off with a bang. In case you missed it, here’s a quick recap of each game.

Game 1: Houston Texans 31, Cincinnati Bengals 10. If you had told me in the beginning of the season that rookie T.J. Yates would be hosting a playoff game against fellow rookie, Andy Dalton, I would have called you crazy. However, led by their strong defenses, both teams were able to find a way into the playoffs, with the Texans winning their first playoff game in franchise history. Arian Foster led the way for the Texans, rushing for 153 yards on 24 carries. END_OF_DOCUMENT_TOKEN_TO_BE_REPLACED

Photo courtesy of withfriendship.com. Andy Reid (pictured above) appears to be sitting on a boiling seat these days. His time in Philadelphia appears about done.

Eagles 34, Cowboys 7. That was the score three weeks ago when the Eagles dominated the Cowboys, winning their second straight game, leading people to believe that the self-proclaimed “Dream Team” had finally figured it out.

How fooled we all were.

After a Week 9 home loss to the Bears on Monday Night Football, Eagles fans had all but lost hope. Week 10 was a new low, as they lost to the John Skelton-led Cardinals in Philadelphia 21-17. At 3-6, Andy Reid’s seat has never been hotter, and the city of Philadelphia has lost its patience. Michael Vick has regressed this season, and his status is in doubt for their Sunday Night game in New York. If he cannot go, Vince Young, the very man who proclaimed the Eagles the “Dream Team” would start. Oh, joy. END_OF_DOCUMENT_TOKEN_TO_BE_REPLACED