Photo courtesy of zimbio.com. The New York Rangers currently possess the best record in the Eastern Conference. Much of the team's success is due in large part to goaltender Henrik Lundqvist (pictured above).

The Garden was simply “Linsane” yesterday as Jeremy Lin led the Knicks to a huge home victory over the defending champion Dallas Mavericks.  Michigan finally exacted some revenge on their bitter rival, Ohio State, handling Sullinger and Co. in Ann Arbor for the first time in a long time (previously had lost 7 straight to the Buckeyes).  And pitchers and catchers began reporting to warm and beautiful cities across the country.  This past week was absolutely wild, but the current week should be some fun too.  Here are the events to keep an eye on.

5.  Is it 1994 all over again?  For the first time in a long time, both the Rangers and Knicks are contenders at the same time (granted the Knicks are only 500, but winners of 8 of 9).  The Rangers currently possess the best record in the East, while the Red Wings have been simply unbeatable as of late, winning six straight games, and 23 straight at home.  This week my attention is focused on a marquee matchup in Pittsburgh tomorrow night. END_OF_DOCUMENT_TOKEN_TO_BE_REPLACED 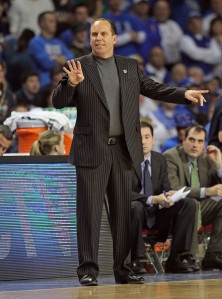 Photo courtesy of zimbio.com. Mike Brey (pictured above) has had his fair share of success at Notre Dame over the past decade. This year may be the best coaching job he has done yet though.

Typically, when a basketball team enters conference play with a record of 8 and 5, they are in big trouble in terms of tournament aspirations.  To add on to the lackluster record, if the team’s best player and senior leader is already out for the season, they are toast.  Add in the fact that this team participates in the Big East Conference.  You probably have a better shot at winning the lottery than going dancing in March.