The importance of Chris Bosh 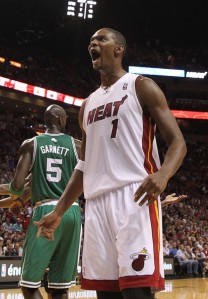 Photo courtesy of zimbio.com. At times, Chris Bosh (pictured above) gets lost in the shuffle on Miami’s loaded roster. People are beginning to realize his importance as Miami struggles to survive in the East without the third member of their “Big Three.”

From the start of the NBA season, the Miami Heat have been the Eastern Conference favorites.  After Chris Bosh’s abdominal strain sidelined him in Game 1 of the Eastern Conference Semi-Finals things began to change. Then falling behind 2-1 in the series, the Heat were thrown into a must-win scenario in Game 4. It was the first time all season that Erik Spoelstra’s squad had been in danger of being eliminated by a non-elite team (any team outside of the Chicago Bulls, Oklahoma City Thunder, and San Antonio Spurs). Their one-game deficit also marked the widespread realization of how important Chris Bosh is to the Heat.  Bosh often gets discounted when it comes to Miami’s “Big Three.” Wade is the long-time hero of Miami who brought a championship to South Beach. LeBron is the four-time MVP who puts the Heat on his back night in and night out. And what is Chris Bosh? In reality, he is an All-Star level talent who has 20 ppg and 10 rpg potential; however, the former Georgia Tech forward is the third scoring option in Miami and does not get the credit he deserves for the role he plays alongside D-Wade and LeBron.

It was not until Chris Bosh had to miss the rest of the Eastern Conference Semi-Finals that fans began to understand just how integral he was to the Heat’s success. Without Bosh, the Heat have the dynamic tandem of LeBron James and Dwyane Wade, aging forwards, and inconsistent shooters. With Bosh on the floor, defenses have to pay attention to both Miami’s guards and forwards. However, if Joel Anthony is involved in a pick-and-roll offense, defenders can concentrate on James and Wade since Anthony is not a major scoring threat. Even if the Heat are Dwyane Wade’s team, Chris Bosh is a more important player. Without Wade this year in the regular season, Miami went 7-1.  Without Bosh, they were 4-5. END_OF_DOCUMENT_TOKEN_TO_BE_REPLACED 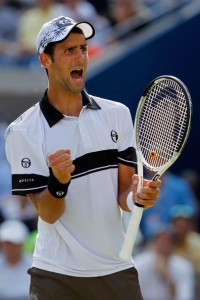 Photo courtesy of zimbio.com. Due to rain, we are getting some bonus tennis today. Can Novak Djokovic (pictured above) handle Nadal on the clay in Rome?

Saturday was not the best of days for the city of  Los Angeles to say the least.  As I have said before, people will soon stop calling Los Angeles “Lob City,” and start calling it “Heartbreak City,” if they haven’t already.   On Saturday, both of their basketball teams blew double-digit point leads. At least they have the Dodgers and the Kings. The NBA and NHL playoffs have been outstanding and the best part is there is still plenty to go.  In addition, I’ll Have Another would love “another” win at the Belmont to become the first Triple Crown winner since 1978.  Last week was great, but this week should be even better.  Here are the events to keep an eye on.

5.  Bonus tennis.  What could be better?  Due to massive amounts of rainfall, the Rome Masters final showdown between the world’s top two players (Djokovic/Nadal) was postponed today.  I by no means am complaining.  The clay-court season has been a bundle of fun as usual as we get ready to head down the home stretch. Roland Garros is just six days away.  Get excited. END_OF_DOCUMENT_TOKEN_TO_BE_REPLACED

Photo courtesy of zimbio.com. How many of you knew who Jeremy Evans (pictured above) was before Saturday night? At least he has a cool nickname (The Human Pogo Stick).

NBA All-Star Saturday Night was one for the ages this year.  And not in a good way.  Your three-winners of the main competitions were Tony Parker, Kevin Love, and Jeremy Evans.  Though the vast majority are well aware of whom Parker and Love are, how many of you actually knew who the guy that “some” people call the “Human Pogo Stick” was before Saturday? END_OF_DOCUMENT_TOKEN_TO_BE_REPLACED 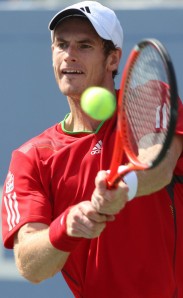 Photo courtesy of zimbio.com. Tennis season is getting ready to heat up. Is it time for Andy Murray (pictured above) to break through?

So the dunk contest was a joke.  Ryan Braun somehow defeated the system.  RGIII once again proved that he is fast.  And College Hoops did not disappoint (I mean when does it at this time of year).  Last week was jam-packed.  But the week ahead should be pretty good in its own right.

5. One of the best tournaments in tennis (outside of the 4 Grand Slams) is just one week away.  I am of course referring to the BNP Paribas Open at lovely Indian Wells.  But before the tour makes the anxiously awaited stop in California, the players have to take advantage of the two tune-ups provided this week. Djokovic, Federer, and Murray will all showcase their abilities at the ATP Dubai Duty Free Tennis Championship, while the ATP Abierto Mexicano Telcel will also be taking place in Acapulco, Mexico.  Though most will not hold their breath in regards to these two tournaments this week,  they should.  Just like in any sport, the hottest players are the ones that take home the big-time tournaments.  Winning a tune-up typically signifies a “Hot-Streak.”  Who will get hot this week? END_OF_DOCUMENT_TOKEN_TO_BE_REPLACED

Photo courtesy of zimbio.com. John Calipari (pictured above) appears well on his way to capturing the first National Championship of his career.

It’s a bird.  It’s a plane.  It’s Anthony Davis?  I will be the first to say that Kentucky is not my favorite team in the world.  To be entirely honest, they are probably my least favorite team in America.  Kentucky, also known as the “Big Blue Nation,” is arguably the most tradition filled program in college basketball and their fans make sure that you are fully aware of it.  They are the end-all be-all of sports in the Bluegrass State.   Either way, there is no denying just how well this team is playing right now.

This year’s Kentucky team has people across the nation saying, “John Wall and Demarcus Cousins who?”  Ever since John Calipari stepped foot in Lexington, the target has been on his back.  And along with his controversial past, he brought an absurd amount of blue chips to Kentucky.  I mean, there have been so many blue chip recruits on the Lexington campus during his three-year run, that he has made the “Fab-Five” sound more like the “Mediocre-Five” on multiple occasions.  People say he is a great recruiter, and unless the NCAA tells us differently, we will have to remain under the assumption that he is playing by the rules. END_OF_DOCUMENT_TOKEN_TO_BE_REPLACED 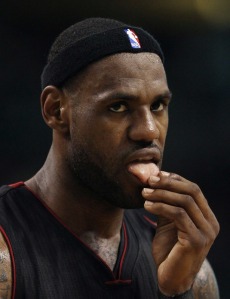 According to our very own Wesley Kaminsky, Lebron James (pictured above) appears to finally have the look of a champion.

Don’t look now, but we are just one game away from both the Lakers and Celtics being eliminated in the second round of the playoffs. When the playoffs begun, many people had these two teams meeting up in the championship for the third time in four years, assuming it would be too difficult to knock off either of these teams in a seven game series. I was not one of those people, seeing as I didn’t make playoff predictions, because of two reasons. The first being that being a die-hard Bulls fan, I know that my favoritism of the Bulls would be evident, and I would think of a million reasons as to why they could not lose in the playoffs. The second reason I did not fill one out was because I really had no idea, and wanted to save myself the embarrassment following a March Madness bracket that I never want to look at again.Anyway, enough about that. Time to get to the action that took place on Monday night, with the Heat taking a commanding 3-1 lead over the Eastern conference champion Celtics. END_OF_DOCUMENT_TOKEN_TO_BE_REPLACED

Barry Melrose (pictured above) is the face of Hockey at ESPN these days. Expect the playoff excitement to continue with some great Conference Semi-Final matchups.

It is another top of the week in the wide world of sports.  Last week was absolutely ludicrous from start to the dramatic finish in New York with the always entertaining NFL Draft.  How couldn’t you enjoy the constant back and forth of Mel Kiper and Jon Gruden?  It was pure entertainment.

Lets take a look at the top 5 for this upcoming week. END_OF_DOCUMENT_TOKEN_TO_BE_REPLACED

Even though Boston has slid into the 3 seed in the East, I think in the last year of the "Big 3" in Beantown, they still will win the Eastern Conference.

After the crazy week that was in sports, there is so much to talk about.  So much going on.  And the fun is just beginning.  Both the NBA and NHL playoffs are right around the corner, while the MLB is already starting to heat up.

Here is a look into some of the main headlines that have caught my attention. END_OF_DOCUMENT_TOKEN_TO_BE_REPLACED

“Stars Aligning: Is this Good for the NBA?” 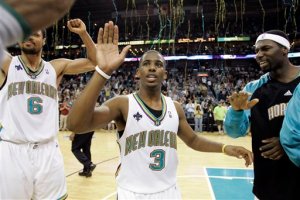 With the major move of Carmelo to New York and Deron Williams to New Jersey, could Chris Paul (pictured above) be next? Our very own Wesley Kaminsky touches on the current state of the NBA.

Remember back in the old NBA days where stars wanted to compete against one another and not join forces for the sole purpose to win a ring? I am talking about back in the days of Michael Jordan, Magic Johnson, and Larry Bird. These guys did not want to play together and dominate the NBA for years to come, they wanted to battle it out and compete against each other. No, I was not around during the days of Bird and Magic, and was a baby while Jordan was in his prime, but I do know one thing, that the NBA has completely changed since then. END_OF_DOCUMENT_TOKEN_TO_BE_REPLACED

“The Hype is Real: How Derrick Rose Can Win MVP” 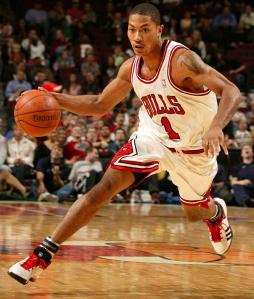 When Derrick Rose posed the question “Why can’t I be MVP?” on day one of Chicago Bulls media day, not many people took him seriously. Rose, the young, humble superstar doesn’t talk much in the press, and when he says something you should believe him. END_OF_DOCUMENT_TOKEN_TO_BE_REPLACED