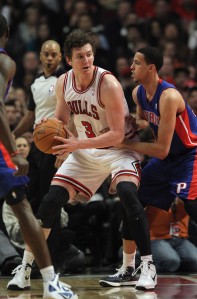 Photo courtesy of zimbio.com. Omer Asik (pictured above) is now making the big bucks in Houston.

“Linsanity’s” humongous payday appeared to be insanity.  In reality, that deal was child’s play on the craziness scale compared to what happened yesterday.  The Houston Rockets once again offered up another three-year 25.1 million deal.  This time, to little-known Omer Asik.  Let me repeat that.  Omer Asik, a player who averaged 3.1 points and 5.3 rebounds per game last year will be making over eight million dollars a year for the next three seasons.

Answer me this:  What is Daryl Morey (Houston GM) thinking?

Believe me, this by no means is the NBA’s version of “Moneyball.”  It is quite the opposite actually.  The three highest paid players on Houston’s roster at the moment are Kevin Martin, Jeremy Lin, and Omer Asik.  Can you say NBDL?  I am not even sure this team could win the D-League championship to be honest.  In its current state, it is that bad. END_OF_DOCUMENT_TOKEN_TO_BE_REPLACED 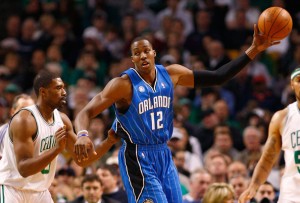 Photo courtesy of zimbio.com. The “Dwight Howard (pictured above) Soap Opera” continues. Most people just want it to be over with at this point.

Baseball’s second half has begun with a bang.  NBA free agency continues at a rapid pace.  The “Freeh Report” has turned a legend into a monster officially.  And guess what?  Things are only going to get better.  Last week was one that will be remembered for a long time, but this week will fun its own right.  Here are the events to keep an eye on.

5.  All eyes will remain focused on the no longer “Happy” Valley.  The Freeh Report has shaken up the entire college football stratosphere.  Paterno’s legacy has been forever tarnished and his role in the horrific incidents are no longer in question.  The real question now is what will be the punishment doled out to Penn State’s football program?  Are we on the verge of witnessing college football’s first death penalty in over 25 years?

4.  Start your engines, and take a deep breath.  For the first and only time until mid-November, the NASCAR Sprint Cup series takes a break this weekend.  After Kasey Kahne stole the show in New Hampshire, everyone is looking to thrust themselves into the top ten of the standings during the course of the next seven races.  Either you are in or you or out for the CHASE.  As of now, Kahne and Carl Edwards are fighting to move up just a couple of spots by the end of the day on September 8th.

3.  The NBA free agency frenzy, has been just that, an absolute frenzy.  Nobody has any clue what is going to happen next in the “Dwight Howard Soap Opera.”  I for one do not really care at this point. END_OF_DOCUMENT_TOKEN_TO_BE_REPLACED 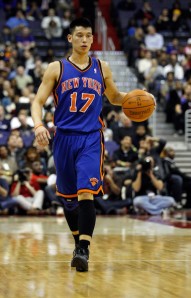 Photo courtesy of zimbio.com. Jeremy Lin (pictured above) took over New York City this past February. Now he is receiving big contract offers. Is Lin really worthy of 29 million over four years?

The story of Jeremy Lin is truly one of my favorites in sports.  I will be the first one to say that I am a major fan of “Linsanity.”  Everyone loves the David versus Goliath story.  The story where a massive underdog defies the odds.  In this particular case, a guy that defied logic, to accomplish dreams.  Jeremy Lin is truly a role model for all and should serve as motivation for anyone looking to realize their dreams regardless if they deal with sports.

Yesterday, recent news regarding the player who took New York City by storm this past February disturbed me.  Reports were released that Lin felt slighted by the Knicks.  That Lin was surprised the Knicks did not make the first move.  In essence, Lin was offended by what has occurred thus far during free agency.  It should be known that Lin has since refuted these statements saying that he never made them (I hope that he didn’t). END_OF_DOCUMENT_TOKEN_TO_BE_REPLACED

The King is learning 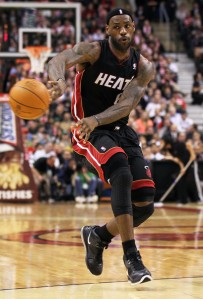 Photo courtesy of zimbio.com. Despite his very muscular physique, LeBron James (pictured above) has never been known for his toughness.

It was once said, “All the world is a laboratory to the inquiring mind.” Learning is a major part of a society.  One should strive to learn something new each and every day.  It is a prerequisite towards success in life.  This applies to all people.  Even those that are referred to as the “King.”

I am of course referring to none other than the most tantalizing figure in sports, LeBron James.  Sure “Tebow Mania” and “Linsanity” are big draws, but neither can sustain the media craze the way that LBJ can.  Well it appears LeBron James has learned a valuable lesson.  People love heroics.  People also love courage.  Courage is looked at as a major positive no matter who you talk to. Sure LeBron still will have to get the monkey of his back come June in showing late game heroics at NBA Finals time, but he is currently demonstrating toughness.  James will play through the pain of a dislocated ring finger on his non-shooting hand.

LeBron was quoted as saying, “I’ll be ready. I hate using injuries as an excuse. If I’m in uniform, then I should be good to go. The only recovery for it, the doctors told me, was rest. And I think we all know I’m having none of that (courtesy of ESPN.com)” END_OF_DOCUMENT_TOKEN_TO_BE_REPLACED 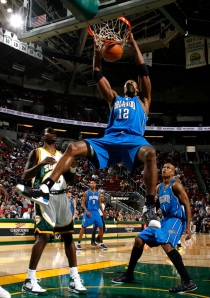 Photo courtesy of zimbio.com. If you were wondering, Dwight Howard (pictured above) wants to be the "guy" no matter who he plays for next year.

Is it just me, or does it seem like something new gets added to the Dwight Howard story every day?  We get it.  Howard is a big deal.  Not only does he average nearly 21 points and 15 rebounds a night, but he is quite possibly the only “true” center left in the NBA.  Or at least the only great center left in the NBA.  Anybody with the nickname “Superman” is likely doing something right.

Now we are 40 games into the 66-game strike shortened season.  Dwight Howard is still in Orlando.  The Magic are currently sitting firmly in the 3rd spot in the Eastern Conference.  They are in contention.  Yes, I realize the trade deadline is less than a week away (set for next Thursday at 3PM).  I just want the game of gossip girl to stop.  Kobe had it right with the way he approached the “he said she said game” with Lakers ownership recently.  Make up your mind.  Either trade Pau Gasol or not.  Though I am not a teammate of Dwight Howard, I am sick of hearing about it.  Let me rephrase that.  I am sick of the ridiculous details that get added to the story each week. And believe me, I love to know rumor central as much as the next guy right as the story is developing.  It is one of the things that makes following sports these days so special.  There is so much information available right as events are happening.  But the way this story has transpired, we know no more now than we did on Christmas. END_OF_DOCUMENT_TOKEN_TO_BE_REPLACED 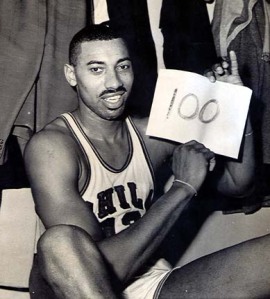 I know that Saturdays are the typical “Throwback” day on “TheSportsKraze.” But today marks a very special anniversary in sports history. Where were you 50 years ago?  I for one was not even born.  And I know for a fact that 99.9999% of you were not in Hershey, Pennsylvania watching the Philadelphia Warriors lay a smack down on the New York Knicks.  Only 9,346 of the 18,496 seat Hershey Sports Arena was filled on that particular night.  These days, a good high school team such as Oak Hill Academy can draw a larger crowd than the one in Hershey, PA 50 years ago for a regular season game.  Well on this particular night, 50 years ago, a goliath man by the name of Wilt Chamberlain, maybe you have heard of him, accomplished one of the greatest feats in sports history. END_OF_DOCUMENT_TOKEN_TO_BE_REPLACED 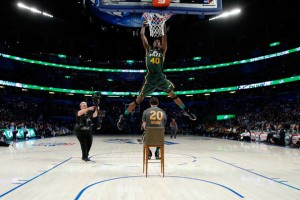 Photo courtesy of zimbio.com. How many of you knew who Jeremy Evans (pictured above) was before Saturday night? At least he has a cool nickname (The Human Pogo Stick).

NBA All-Star Saturday Night was one for the ages this year.  And not in a good way.  Your three-winners of the main competitions were Tony Parker, Kevin Love, and Jeremy Evans.  Though the vast majority are well aware of whom Parker and Love are, how many of you actually knew who the guy that “some” people call the “Human Pogo Stick” was before Saturday? END_OF_DOCUMENT_TOKEN_TO_BE_REPLACED