Photo courtesy of zimbio.com. Our very own Toni Headley is picking the current number one ranked player in the world Victoria Azarenka (pictured above) to stay hot and take home the title at Indian Wells.

As the biggest and brightest stars descend on the picturesque town of Indian Wells, California for the BNP Paribas Open, I am excited to see how newly minted #1 Victoria Azarenka will fare in her first big test since winning her maiden Grand Slam title in Australia.  Also, can Novak Djokovic maintain his dominant form that carried him to his fifth Grand Slam title in Australia and defend his title here in the desert?

Will the weight of being the #1 player in the world finally get to Azarenka? It certainly has not so far. After winning the Australian Open and becoming the #1 ranked player, Azarenka continued her dominance by winning her next tournament in Doha. She is currently riding a 17 match winning streak. Azarenka has had a sizzling start to the year winning three titles which includes her first Grand Slam. Let’s see if Azarenka can win here for the first time, and continue her dominance on the women’s tour. END_OF_DOCUMENT_TOKEN_TO_BE_REPLACED 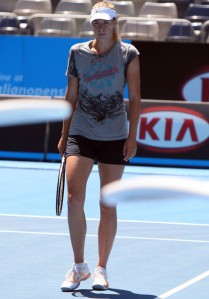 Photo courtesy of zimbio.com. Maria Sharapova (pictured above) will be one of the stars taking center court at Madison Square Garden this evening.

As a precursor to the start of the BNP Paribas Open tennis tournament from Indian Wells California, tennis fans will be treated to some exhibition tennis from the world’s most famous arena Madison Square Garden or “The Garden,” as it is sometimes called. Billed as “Tennis Night in America,” fans will get to see the likes of four former number one players, Maria Sharapova, Caroline Wozniacki, Roger Federer, and Andy Roddick.

Both matches will feature a best of three format. First up will be Maria Sharapova vs. Caroline Wozniacki, which begins at 7pm on ESPN3.com.  This will be followed by Roger Federer vs. Andy Roddick at 11:30pm on ESPN. END_OF_DOCUMENT_TOKEN_TO_BE_REPLACED