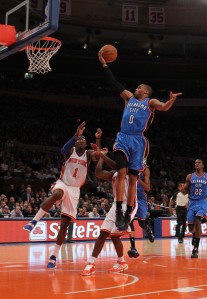 Photo courtesy of zimbio.com. The point guard matchup in the Western Conference finals between Russell Westbrook (pictured above) and Tony Parker should be one for the ages.

Let’s not beat around the bush. The Western Conference semifinals were a major bust.  The city of Los Angeles (Clippers and Lakers) was entirely overmatched and mustered up one total victory.  Now, the matchup everyone has been waiting for in the Wild Wild West is set.  Who isn’t excited for the Spurs/Thunder showdown set to start on Sunday?

Not only did the supposedly “over the hill” San Antonio Spurs tie for the best record in the NBA, they also have won 18 straight games.  The Oklahoma City Thunder are coming off an emphatic thrashing of the Los Angeles Lakers.  OKC has been the favorite all year long out West, and lived up to the part until the final couple of weeks of the season when San Antonio leapfrogged them for the number one seed.  So despite San Antonio possessing the number one seed and cruising through the first two rounds, all records get tossed out the window.  The score is 0 to 0 come Sunday.

Not only did the Spurs and Thunder finish 2nd and 3rd in the NBA in terms of scoring offense this season, they also finished 16th and 17th in terms of scoring defense.  These teams put up frighteningly similar statistics during the course of the 66 game shortened season.  Can you say seven game series?

Flip a coin on what “Big Three” is better.  On one hand, San Antonio has the old-school trifecta featuring Parker, Duncan, and Ginobli.  On the other hand, OKC has a terrific trio in Westbrook, Durant, and Harden.  This series will start and end at the point guard position though. Tony Parker versus Russell Westbrook. END_OF_DOCUMENT_TOKEN_TO_BE_REPLACED

The opening round brought the city of Los Angeles to a fever pitch.  Round two will bring heartbreak.  In a little over a week, people will be referring to Los Angeles as “Heartbreak City,” rather than “Basketball Central.”  Even if you are not a fan of the Lakers or the Clippers, you have to admit that an all LA Western Conference Finals showdown would be special.  “Lob City” versus the Kobe Bryant Show.  What could be better than that?

Unfortunately, I am going to go out on a limb and say that it isn’t going to happen.  This is not the same Lakers team that made three consecutive finals appearances from 2008 to 2010.  They are full of flaws, lacking the effort and determination to lay it all on the line every night. The Clippers are not only tired and injury riddled, they are overmatched against a very experienced and well coached San Antonio team.  Gregg Popovich is arguably the best in the business for a reason.

Kobe Bryant will have to play out of this world for LA to stretch this series more than five games.  The Nuggets made the Lakers look like they were standing still at times during the opening round.  What do you think the Thunder are going to do?  Not to mention the Thunder are much bigger inside than the Nuggets with Ibaka and a now healthy Perkins.  I tip my hat to the Clippers on taking down a very good Grizzlies team.  But the Spurs are even better than Memphis.  Plus, both of the star players on the Clippers are currently struggling with various injuries.

It has been a great year for Los Angeles in terms of NBA basketball.  As a consolation prize though, the Kings appear unstoppable in terms of the NHL and the Dodgers currently boast the best record in the National League.  In terms of basketball though, Los Angeles should start thinking about the 2012/2013 season. END_OF_DOCUMENT_TOKEN_TO_BE_REPLACED

Photo courtesy of zimbio.com. Cody Zeller (pictured above) is projected as a sure-fire lottery pick. Yet, he is on the fence about whether he should stay in Bloomington or take his talents to the NBA. He has 20 days to make up his mind.

Sunday was truly a “fun” day in the sporting world. Masters insanity.  Carmelo put on a Broadway-esque performance in the Big Apple.  And John Isner led the US Davis Cup team into the semifinals.  It was a wild Sunday to say the least.  Last week was fun.  But this week is poised to be every bit as entertaining.  Here are the events to keep an eye on.

5.  Should I stay or should I go?  Many college basketball players across the country are pondering this question as they heavily weigh their options on if they should spend more time at the collegiate ranks, or try to take their talents to the professional level.  Every year there are guys that declare, that really have no business departing. Also though, there are always guys that could have left, that decide to stay for another year and continue to refine their skills 20 days remain for the non-seniors to make up their minds.  Remember, only 60 players will get drafted come June 28th. END_OF_DOCUMENT_TOKEN_TO_BE_REPLACED

Photo courtesy of zimbio.com. Roger Federer (left) seems to be back to his old ways after defeating Andy Murray (right) to win his second consecutive title. It should be fun to see if the former number one player can continue his hot streak in Indian Wells.

Hoops, hoops, and more hoops.  You thought this week was great in terms of College Basketball and the NBA?  Just wait.  This week was just an appetizer to the main course.  In addition, more scandal came out in the sporting world this for a change (bounty hunting).  Last week was fun.  But this week has the makings of being any better.  Here are the events to keep an eye on.

5.  The NHL’s Eastern Conference has turned into a three-team race.  Go figure that two of the teams are from Boston and New York.  What would professional sports be without the good old Boston/New York hate-fest?  Yesterday, was a treat as we got to witness the Rangers flex their Eastern Conference leading muscles to a 4-3 victory over the defending Stanley Cup Champion Boston Bruins.  I have a feeling that there is a seven-game series in store between these teams in the near future.  As always, here is my matchup of the week.

Florida Panthers at Pittsburgh Penguins:  Two of the East’s finest go to battle at the CONSOL Energy Center.  Pittsburgh’s electric offense led by Evgeni Malkin welcomes into town a Panthers team that just flat-out knows how to win.  If you asked me why Florida has been so successful this season, I couldn’t tell you.  They just have won game at an impressive rate.  Lately though, Pittsburgh has played much better hockey than the Panthers.  I expect this to continue.  Look for the Penguins to handle business at home, where they have been very tough to beat this year. END_OF_DOCUMENT_TOKEN_TO_BE_REPLACED

Cincinnati Bengal's wide receiver has talked trash to Raven's Safety Tom Zbikowski (pictured above, left) via Twitter about a possible boxing match between the two NFL players. Does Chad Ochocino really want to get in the ring with that guy?

It is another Tuesday.  Which means it is time for some “Food for Thought.”  These are the topics in sports that have really caught my attention in the past 24 hours.  Items that must be discussed.  So let’s jump right into it. END_OF_DOCUMENT_TOKEN_TO_BE_REPLACED