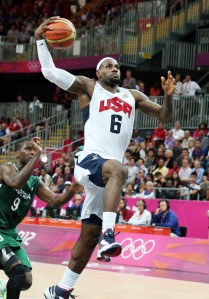 Photo courtesy of zimbio.com. Will LeBron James (pictured above) lead Team USA to gold? Our very own Nick Craddock weighs in.

The preliminary round of the London 2012 edition of the men’s basketball competition concluded Monday and we’ve learned (or merely confirmed) that the United States, which is escaping the group stage unscathed, is still the team to beat for the gold medal.

After the United States, the question of which team poses the biggest threat to the heavy favorites remains unclear. While the aforementioned question does not yield a definitive answer, what is clear heading into the medal round, which begins Wednesday, is that a handful of teams from the chasing pack can challenge LeBron James and Co. on a great day for American opponents or a bad day for the Americans when it comes to their own execution.

In a single-elimination format, anything could happen for these teams still vying for Olympic success: END_OF_DOCUMENT_TOKEN_TO_BE_REPLACED

Olympic potpourri: Half way to the London 2012 finish line

Image courtesy of olympic.org. Over a week of London 2012 is in the books.

The London 2012 Olympics are already in their second weekend and with the Games at their midpoint, here are some pressing questions you might be asking yourself.

1. Is Michael Phelps the greatest Olympian ever?

Of all the questions posited here, this one is clearly a rhetorical question with absolutely no debate whatsoever. Michael Phelps is the greatest Olympian ever. Period. With 22 medals, 18 of them gold, Phelps has dominated the pool across a variety of stroke disciplines and distances.

Frankly, to think that Phelps winning four gold medals and two silver medals at a single Olympics can be considered a relatively so-so performance given his previous accomplishments, speaks volumes as to how accustomed we’ve become to his near perfection in the water.

A week ago, Phelps seemed out of sorts after a disappointing 400-meter individual medley race, but ever since he set the record for the most medals won by an Olympian midweek, his grin has seemed to grow larger each day and, more importantly, enjoying himself and his races.

Enjoy the well-deserved rest, Mr. Phelps. Your career will certainly be remembered as the best the Olympics has seen to date. END_OF_DOCUMENT_TOKEN_TO_BE_REPLACED