By Josh Kramer So much for the “Battle of Ohio.”  The first part of the annual six game set between the Reds and the Indians became a massacre in a hurry as the Reds busted out the brooms yesterday afternoon.  … Continue reading →

Photo courtesy of zimbio.com. Curtis Granderson (left) and Derek Jeter (right) are two of the main reasons why the New York Yankees are right in the thick of things in the AL East as usual.

Can you say playoffs?  The past month and a half has been defined by playoff action.  Last week though, Grand Slam tennis in Paris was added to the slate.  Not to mention Tiger Woods tied Jack Nicklaus with PGA victory number 73.  I thoroughly enjoyed last week, but this week will be even better as we delve deeper into the playoffs and action at Roland Garros.  Here are the events to keep an eye on.

5.  A 20-minute long red flag at Dover on Sunday.  12 cars were involved in the massive collision that occurred on the exit of Turn 2.  Hopefully next Sunday will be a little less eventful at Pocono Raceway as Jimmie Johnson looks to jump Greg Biffle atop the Sprint Cup Series.

4.  It took 8,020 and games and 134 pitches from Johan Santana.  But the Mets finally have a no-hitter.  Both Roy Oswalt and Dustin Pedroia are making two very different types of comebacks.  And after a stellar career in which he posted a career .309 batting average, Magglio Ordonez is officially hanging up the spikes.  Also what is the deal in the East?  All teams are within striking distance in both the AL and NL East, with no team trailing first place by more than 3.5 games.  The matchup of the week will take place in the Bronx.

Tampa Bay Rays vs New York Yankees:  Every team in the AL East is very much in contention at the moment.  Amazingly, all five teams have a positive run differential.  The AL Central currently only has one team with a positive run differential (Cleveland).  But let’s be entirely honest.  Does anyone truly think the Orioles or Blue Jays will be in contention come October?  The AL East has been a three-team race for years now and will continue to stay that way into the foreseeable future.  The Yankees and Rays happen to be two of those three teams in contention each and every year.

As is typically the case in New York, the Bronx Bombers have been dropping bombs all year long, leading the American League in home runs.  Tampa Bay on the other hand has won in a much different fashion, relying heavily on their very talented pitching staff.  David Price and Jeremy Hellickson have both been stifling the opposition since the beginning of April.  For the Yankees, the Captain (Derek Jeter), who actually just celebrated the ten-year anniversary of becoming the Yankees captain yesterday, has turned into a modern-day version of Ponce de Leon, discovering the baseball fountain of youth.  Also, Curtis Granderson’s insane power has been another key to New York’s success.  The Rays swept the Yankees to open the season back in early April.  New York returned the favor by taking two of three at the beginning of May.  Look for Tampa to turn the tables yet again taking two of three, with Hellickson and Price starting two of the games. END_OF_DOCUMENT_TOKEN_TO_BE_REPLACED 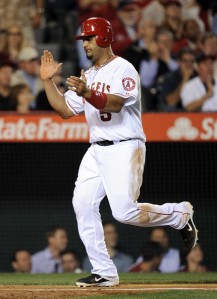 Photo coutesy of zimbio.com. Albert Pujols (pictured above) and the Los Angeles Angels have not had much to celebrate during the early going of the 2012 season. Will the Angels turn things around and begin to live up to expectations?

Is it me or has the MLB been turned upside down?  Derek Jeter is batting over 400 at age 37.  Albert Pujols has one home run (he finally hit one on Sunday).  And Ryan Dempster leads the National League in ERA (all of these stats were heading into play yesterday).  How about the current standings though?

-Chicago “We have fun at Wrigleyville” Cubs

-San Diego “This is not a shocker” Padres

-Boston “We are always a contender” Red Sox

-Cleveland “We are more famous for a movie” Indians

Photo courtesy of thenewsportsguru.com. Robert Griffin III (pictured above) and other rookies are getting their first reps with their new employers already.

The word “playoffs” is the best way to describe the wide world of sports over the past week.  And guess what.  “Playoffs” will continue to be the heart of the sporting world this week. Here are the main events to keep an eye on.

5.  Wednesday was one of the most wild days in recent memory regarding the NFL.  It even topped the Manning/Tebow bonanza.  There was some good, some bad, and some sad.  Well rookies like Andrew Luck, Robert Griffin III, and others are getting their first real workouts in with their new employees.  Keep an eye out as rookie minicamp finishes. END_OF_DOCUMENT_TOKEN_TO_BE_REPLACED

Photo courtesy of zimbio.com. Rudy Gay (pictured above) is the main guy in Memphis these days. After suffering a heartbreaking loss on Sunday, the Grizzlies will rely heavily on Gay to help get Memphis back into the series.

Today is a special day for “TheSportsKraze.”  Back when I started this blog in September of 2009, I never could have imagined all that I would learn from this experience.  Writing daily on this forum has truly been a blessing and helped me grow as both a writer and as a person.  When my roommate convinced me to start “TheSportsKraze,” I figured it would be a nice little hobby that may get some looks from ten to twenty of my closest family and friends a day.  These days, “TheSportsKraze” has become a major part of my daily routine and is read by hundreds of people from across the globe every day.  Well today, we have hit the 900th post.  Please take it in and enjoy.

All NBA fans had the Clippers/Grizzlies series circled as the one that would provide some fireworks in the opening round. Well the series opener did not disappoint by any means.  I turned the game off after the third quarter.  It was already kind of late, and the Grizzlies were absolutely making a mockery out of “Lob City.”  Shame on me for not watching the full 48 minutes.  The beauty of sports is no game is ever over until the final horn sounds or the final out is made.  I learned this as a young child when Reggie Miller ripped the hearts out of the New York Knicks by scoring eight points in nine seconds on May 7, 1995.

I have been high on the Grizzlies all season.  There is a reason why I picked them way back in December to play deep into the postseason.  The Grizzlies shocked the Spurs last year.  And this off-season, they only appeared to get better.  Through three quarters on Sunday, they looked the part as a major contender in the West.  Then the fourth quarter from hell struck. END_OF_DOCUMENT_TOKEN_TO_BE_REPLACED 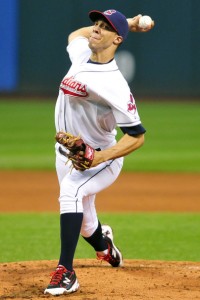 Photo courtesy of zimbio.com. Ubaldo Jimenez (pictured above) has had a nightmarish past two years. Sunday added to the woes. Can he ever regain his form from April-July of 2010?

Back on July 8, 2010, Ubaldo Jimenez was hands down the best pitcher in baseball.  He was sitting pretty with a 15-1 record and a 2.20 ERA.  Jimenez was just a couple of days away from representing the National League as the starting pitcher in the All-Star Game, and appeared to be on track to break records.  Nearly two years later, Ubaldo’s world has been flipped upside down.

On April 1, 2012, Ubaldo Jimenez hit a new low.  Going against his former teammates for the first time, Ubaldo took aim at Rockies star Troy Tulowitzki.  There is no way to be 100% sure that Jimenez beamed Tulo on purpose, but his reaction did not provide any comfort for those on either side.  Jimenez seemed ready to throw down with his former teammate whom most are aware was never his favorite person.  I know that players get hit by pitches every game.  Even at times pitchers drill opposing hitters on purpose.  It is a part of baseball and has been for well over 100 years.

But this is Spring Training.  The Rockies and Indians both officially open up the 2012 campaign later this week.  I do feel Rockies Manager Jim Tracy overreacted a bit when he said, “It’s the most gutless act I have seen in 35 years of professional baseball. I have lost all respect for him. To do something like that and walk down off the mound, and if there’s any suggestion whatsoever that the ball got away, I don’t want to hear any of that (expletive). He intentionally threw at him. He should be suspended. I am going to be very disappointed if he doesn’t get suspended. He deserves to be.”

Amid all of this controversy and Ubaldo’s five-game suspension, his insane decline as a pitcher has been lost. END_OF_DOCUMENT_TOKEN_TO_BE_REPLACED

By Mike Jarvis After hearing the news Thursday that Albert Pujols signed with the Angel’s, several headlines caught my attention. By far the most absurd, ludicrous, and shocking reports I saw was the “so what” attitude by a number of Cardinals … Continue reading →

Photo courtesy of thetennistimes.com. Tennis has taken over the Big Apple. Make sure to watch the US Open.

College Football has begun.  NFL Football is just a few days away.  And the US Open is heating up in the Big Apple.  What a week it was and what a week we have ahead.  Here are the main events you should be aware of.

5.  We may not have an NBA season this year.  But as we learned in June’s NBA Draft, basketball has truly become international.  The European Basketball Championships continue on.  Players such as Dirk Nowitzki, Tony Parker, Pau Gasol, Danilo Gallineri, and more represent their respective countries in the major tournament.  It is the best basketball going right now. END_OF_DOCUMENT_TOKEN_TO_BE_REPLACED

By Josh Kramer All season we have been deceived.  The media and press have tricked us all into believing that the Indians and Pirates were the feel good stories in the MLB this year.  I hate to say it, but the … Continue reading →

By Josh Kramer Once upon a time Cleveland was the home of LeBron James.  The King was Cleveland’s savior.  That relationship came to an unfortunate end though and the Cavaliers have been abysmal ever since the infamous “Decision.”  A couple of … Continue reading →