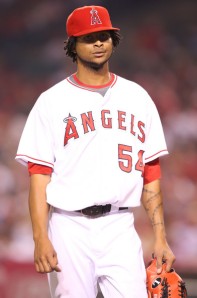 Photo courtesy of zimbio.com. Ervin Santana (pictured above) and the Angels pitching staff need to come up big in a crucial series against the lethal Texas Rangers offense this week.

Last week was another great week in the wide world of sports.  This week promises to be another good one too.

Here are the main items you should be keeping an eye on.

5.  We are in the midst of the continued Big 12 shakeup, or are we?  A&M appeared headed for the SEC but was rejected (at least for now).  False alarm I guess.  And there were also rumors about Missouri, Clemson, and Florida State heading to America’s best football conference as well.  Even with yesterday’s false alarm, it still appears that the landscape of college sports could be on the verge of a major makeover in the near future.  END_OF_DOCUMENT_TOKEN_TO_BE_REPLACED