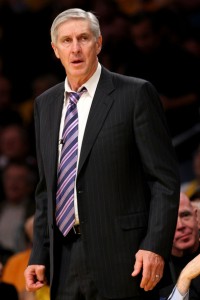 One of the NBA's All Time Greatest Coaches, Jerry Sloan (pictured above), has the Jazz at the top of the West. Are the Jazz a real deal contender?

The College Football regular season is all but finished.  People got their dream BCS National Championship which will pit Auburn versus Oregon.  Also, people got to see the Steelers go to work last evening and they once again showed America that all they do is “Win, Win, Win, Win.”  So I will admit, this week will be a little weird without a full slate of College Football games.  It is the first time since early September actually.

But here is a look into the excitement in store for this upcoming week.

5.  In the NHL, the season is slightly past the quarter marker, and the League’s two best players seem to be leading their teams to an epic Eastern Conference Finals Showdown.  Tune in this week and watch Pittsburgh and Washington continue to ride their stars toward deep playoff runs.

4.  Jayson Werth has signed with the Nationals.  Lance Berkman will return to the NL Central, but this time as a member of the St. Louis Cardinals. The Captain will remain in the Pinstripes for at least 3 more years.  And the Red Sox are on the cusp of a major deal.  Could Adrian Gonzalez land in Boston?  This will be a huge pickup for the Bo Sox and really aid in picking up their offensive production.  The million dollar question still remains though.  Where is Cliff Lee, Mr. October himself, going to end up?  Also there is a guy named Carl Crawford that can run a little bit who is available out of Tampa.

3.  College Basketball is starting to heat up as teams continue to prep for big time conference play.  There are a good few major non conference matchups.  Here is a closer look.

Memphis at Kansas:  This duel between top 20 foes should be very exciting.  In this rematch of the National Title Game of a few years ago, each squad looks to make a major statement and pick up a big time non conference win.  It is a shame that Kansas Freshman phenom Josh Selby will not be eligible for this one.

Michigan State at Syracuse:  A matchup between two of College Basketball perennial forces.  Two programs that have really been at the forefront of the game for the past decade.  Also, these are two programs led by two of the best coaches in America.  Which squad will come out victorious as each not only fights for a big non conference win and to maintain their top ten ranking, but each are looking to make a statement about their conference.  This game should help in the debate about which conference is the best in America, the Big Ten, or the Big East.

Notre Dame vs Kentucky:  What a game this should be.  Notre Dame has been a pleasant surprise so far and looks to maintain their undefeated record vs their first ranked opponent of the season.  Sadly for the Fighting Irish, they get to take on a Kentucky team that is coming off a heartbreaking loss at the hands of the Tar Heels.  This should be a very high scoring affair between two teams that can really put the ball in the basket.

Butler at Xavier:  A matchup between the two top “Mid Major” programs in America.  So what if both teams are off to a slower start out of the gates than most expected.  Both teams always find a way to sneak into March, and I expect nothing different this year.  Also last year, Butler beat the Musketeers on one of the most controversial calls I have ever witnessed in my life.  Will the Muskies have lady luck on their side this time and pick up a much-needed non conference victory over a solid opponent?  The home court advantage could really help XU in this one.

Tennessee at Pittsburgh:  A game that pits two top 20, undefeated squads.  The Vols have looked awesome thus far and already have knocked off a top 10 Big East foe this year.  Freshman, Tobias Harris, and seasoned vet Scotty Hopson have been simply awesome in the early going.  Can Pittsburgh continue to ride their very experienced group and amazing rebounding ability to another big time non conference victory?  This game should be close from start to finish.

2.  The NBA Bus rolls on.  The Knicks are over 500 and have won 4 straight games.  Plus the team that was “too old,” San Antonio, sports the League’s best record.  It is the NBA and you got to love it.

Some of the marquee matchups for the week.

Oklahoma City at Chicago:  Two of the League’s best teams go to war in the Windy City.  Who is a better young point guard, Russell Westbrook or Derrick Rose?  Take your pick because both guys are capable of taking over a ball game at any time.

Miami at Utah:  The South Beach Show travels to Utah to take on a surprise Utah team that is really showing the power of team basketball.  Jerry Sloan is one of the League’s all time great coaches, and this year, he is putting on one of his best performances.

Orlando at Portland:  Yes, I realize that Portland is under 500, but they are always dangerous.  The year is still young, and Portland could really gain some confidence in knocking off the team sporting the 2nd best record in the Eastern Conference.

Los Angeles Lakers at Chicago:  It is always fun to watch two first place teams get together.  Neither of these teams are off to as stellar of a start as expected, but both are definite contenders in their respective conferences.  Look for Kobe to provide some fireworks in this one.

Atlanta at San Antonio:  Can the talented boys out of ATL show the “old men” of San Antonio a lesson?  San Antonio has been outstanding all season and are really a remarkable story.

Orlando at Utah:  Two of the League’s best go to battle in Salt Lake City.  This is a definite game that I would love to tune in and watch.  Could this be a possible preview of the Finals?

Utah at Dallas:  Both of these mainstays in the West continue to win each and every  year.  It never gets old watching two of the best and most consistent franchises in basketball go head to head.

1.  We enter Week 14 of the NFL Season.  Real football weather is here.  And all teams are getting ready for the stretch run.  Next week’s lineup features two great matchups.

New England at Chicago:  Two of the best teams meet at Soldier Field.  I will tell you that I would much rather watch this one from the couch.  It will be bitterly cold.

Kansas City at San Diego:  The amazing AFC West race continues.  Can the Chargers rebound and pick up a must win vs KC?

So there you have events to look for regarding the sporting stratosphere for this week.  Make sure to take it all in.