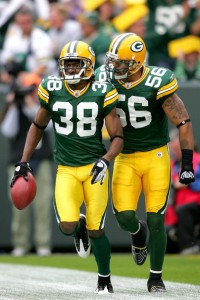 Packer's Cornerback, #38 Tramon Williams (pictured above) has been outstanding all year long, and especially in the playoffs. With 3 interceptions in the postseason already, look for him to add to that total on Sunday.

We are getting closer to Dallas people.  To be exact, we are just over 2 weeks away from the big game.  The NFL is America’s most popular professional sport.  And the Super Bowl is the culminating event.  It has been another phenomenal year full of stellar on the field play, injuries, on/off the field issues, #4 shenanigans, and upsets galore.  Plus there is the looming issue with the CBA (Collective Bargaining Agreement).

Well now we are down to the NFL’s version of the Final Four.  We have already heard our very own Wesley Kaminsky’s outlook for the two Conference Championship Games.  Now it is my turn. END_OF_DOCUMENT_TOKEN_TO_BE_REPLACED