“It All Comes Down to This: Super Bowl XLV Preview” 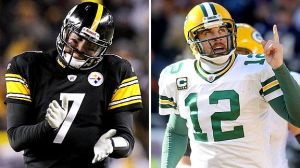 Our very own Wesley Kaminsky has provided his Super Bowl analysis. One of the key matchups is that at the Quarterback position. Roethlisberger (left) versus Rodgers (right).

In a season in which we’ve seen everything from Michael Vick’s rebirth to Sal Alosi tripping Nolan Carroll, the NFL season is finally coming to a close. The Packers and Steelers, two of the most storied franchises in NFL history, will battle for the Lombardi Trophy, You could not ask for a better match-up for Super Bowl 45. Which ever team wins, it will be an amazing story for either Ben Roethlisberger, or Aaron Rodgers. END_OF_DOCUMENT_TOKEN_TO_BE_REPLACED