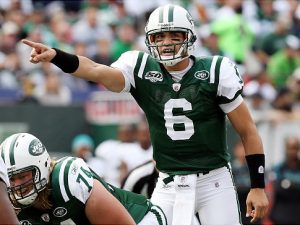 Mark Sanchez may have taken Tom Brady's spot as the "pretty boy" quarterback in the AFC East. The Jets are the pick of TheSportsKraze to take the divisional crown.

NFL Training Camp is right around the corner.  Which means that the NFL regular season is just about a month and a half away.  So let the madness begin.  I will not be giving Fantasy Football projections.  I can simply leave that up to ESPN and all the other websites.  But I will weigh in with my thoughts on each division and pick a winner.  But also please realize that these picks are coming just before or during the beginning of training camp.  Training Camp is always full of injuries.  So take that into consideration.

First of all you have 3 of the coldest weather places in the NFL.  Buffalo, New England, and New York all have bitterly cold and snow filled winters.  This really plays a large piece of what happens down the stretch.  Then of course there is beautiful Miami which will probably never see snow during our lifetime.

Buffalo Bills (4th):  So lets start at the bottom of the division.  I have the Buffalo Bills finishing last as they did last year.  With the very probable loss of Terrell Owens, who is not nearly what he was at the age of 37, this team really has no big time players.  Their most recognizable names are WR Lee Evans, LB Paul Posluszny, and S Jairus Byrd.  Their quarterback Trent Edwards had a very weak year last season in which he did not play in 7 games and threw more interceptions than touchdowns.  Never a good sign.  Their running back combo will consist of hot-shot rookie CJ Spiller and savvy veteran Marshawn Lynch.  Though I feel Spiller has a ton of upside, this team will struggle so much in the passing game, that teams will be able to throw 8 or 9 guys in the box at all times.  Spiller will be good for a rookie, but playing in Buffalo as a running back will be very tough due to the extreme cold and lack of a passing game.

Miami Dolphins (3rd):  The team I have finishing 3rd in this division is the Miami Dolphins.  Now Miami is a solid team.  Though they finished 7 and 9 last season, they did lose their final 3 games.  So they were right in the thick of the playoff race for the majority of the season.  Miami made a great offseason pickup in nabbing Brandon Marshall.  Marshall is one of the game’s very best receivers and will add a much-needed possession and deep threat combo guy to the Dolphin’s offensive repertoire.  They also possess possibly the best left tackle in the game in Jake Long.  Not to mention they have a very solid 2 headed monster at running back in Ricky Williams and Ronnie Brown.  The NFL has become a League where you must have 2 strong backs to be successful.  One very strong featured back with the lack of a compliment does not typically translate to success anymore in the NFL.  The only thing that will really hold this team back in my eyes is their mediocre at best quarterback in Chad Henne.  Sure he will have a great rushing attack to lean on and a big play receiver in Brandon Marshall, but the Patriots and Jets will both have very strong defenses and should really confuse the former Michigan star.  Not to mention Miami has a mediocre at best defense led by Kendall Langford and Randy Starks on the line.

New England Patriots (2nd):  My pick to finish in 2nd in the AFC East is the New England Patriots.  Yes the Tom Brady, 3 time Super Bowl winning Patriots.  And first of all lets put to rest the rumors of turmoil between Brady and Patriot’s ownership.  These are false and will have no affect on the team.  The Patriots will be tough this  year.  And you better believe they are looking for redemption after their embarrassing playoff loss at the hands of Ray Lewis, Ed Reed, and the Baltimore Ravens.  The Patriots will once again be led by a phenomenal passing attack which features Tom Brady, Randy Moss, and a “should be” healthy Wes Welker.  All reports are saying that the best possession receiver in the game “should be” healthy for the Patriots Week 1 battle with Cincinnati.  Now the Patriots are a team that featured a stellar offense last season and also a fairly strong defense.  They are led by possibly the best preparation coach in the game in Bill Belichick.  Belichick is the Peyton Manning of coaches when it comes to preparing his team for games.  This team probably only has one somewhat noticeable weakness.  And that is their running back corpse.  Laurence Maroney has never really panned out as expected and he will be joined by Sammy Morris to provide the Patriot’s one-two punch (I do realize they have old man river Fred Taylor as well).  Now I also realize that it is tough for running backs in New England due to the fact that they throw so much.  But neither of these guys have given Bill much reason to have confidence in them.  Look for this team to nab a wildcard, but also realize that I do not see them making a Super Bowl run.  The Patriots are beginning to remind me of the San Antonio Spurs of the NFL.  They are a team that will make the playoffs and will always be dangerous due to players like Brady and the great coaching of Belichick, but their glory days seem to be behind them.

New York Jets (1st):  I have the New York Jets finishing in 1st.  Yes, I realize that this is the AFC East.  A division that has been owned by the Patriots for around a decade.  But the Jets on paper appear to have the best team in football.  They are a team that shocked the world in last year’s playoffs by advancing all the way to the AFC Championship Game.  They appear to have dramatically improved from last year on paper.  This team had the best defense in the League last season and I do not see any reason why they will not be right near the top again this year.  Their defense will be led by the best corner in the game in Darrelle Revis, a very talented linebacking corpse led by Calvin Pace and David Harris, and of course the defensive mastermind that is Rex Ryan.  In addition, their offense should be better.  Not just simply because Mark Sanchez has a full year of experience under his belt, but because they brought in a big time playoff experienced receiver in Santonio Holmes to play alongside Braylon Edwards.  Also they picked up a seasoned veteran running back in LaDainian Tomlinson to help groom the very talented former Iowa Hawkeye, Shonn Greene.  In addition, I forgot to mention that they even made upgrades to their already stellar defense with the likes of Antonio Cromartie and Jason Taylor.  You better believe that this Jet’s team is the real deal.

Many are saying it is Super Bowl or bust for the Jets this year.  And this seems to be a fair statement.  Expect the Jets to gain the AFC East crown on the way to another deep playoff run.

Stay tuned for the next edition of TheSportskraze.