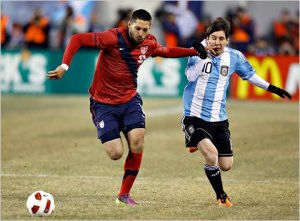 It’s only fair that we start with the best, and end with the rest. Having been the butt of criticism over the past several years that he performs miraculously with his club team, but bombs while playing for his own country, Lionel Messi did just a bit to quiet the naysayers down.

This weekend, while playing a World Cup qualifier against rival South American country Paraguay, the “little man” from Argentina netted yet another feat of footballing genius. By now commonly regarded as the best player in the world, and by some (Argentinians, and myself) regarded as the best player of all time, Messi this weekend showed the international community once again what all the hype is about.

Not usually known for bending it like Beckham in dazzling display of free kick brilliance, Messi is more a man for the fans of “the beautiful game.” Lots of dribbling, quick moves, and flick shot goals. That’s Messi. Guys like Beckham and Ronaldo are the power thighs, known for outrageous curving shots coming around bodies at lethal velocities towards the goal.

But in THIS KICK, Messi showed once again that he can do it all – and do it quite well actually.

Almost straight out of the kickoff, the American men put it into play in the Jamaican box, volleyed, touched, shot on goal, rebounded, and scored. One minute in. And who was it to put it in the back of the net? None other than my main man, and new addition to the EPL elite as part of Tottenham – Clint Dempsey.

I jumped for joy at the goal. Dempsey was doing just what we’d all hoped: looking in international games exactly the way he’s looked in the English Premier League for the past several seasons – in a word, outstanding.

But Dempsey’s shiner was the beginning and end for the U.S. against Jamaica. Our boys played increasingly good – but painfully American – football, and happened to catch the unlucky breaks as Jamaica scored two from set piece free kicks. All in all, the brain of the men in this game was roughly the same as it’s always been: too much focus on the long ball, the big play, the Hail Mary – and not enough attention to detail; the little touches, the quick passes, the seams in the defense. Maybe I’d like to see America play more like the Europeans, and maybe that will just never be our style.

Next week, the U.S. plays a second leg against Jamaica here in the states – in Columbus, Ohio as a matter of fact – hoping desperately for a win on home soil. Whether or not they get it will depend a lot on Clint Dempsey, a lot on Tim Howard, and a lot on the hope that we can put the kind of touches on the ball that earned the game the name “beautiful” in the first place.